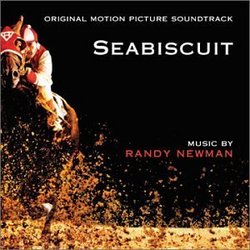 Seabiscuit, based on the book by Laura Hillenbrand, is the story of jockey "Red" Pollard, horse owner Charles Howard, horse trainer Tom Smith and of course, the horse Seabiscuit himself. The book is a true story and the movie is mostly a true story, set against the backdrop of depression-era America. Tobey Maguire portrays jockey Red Pollard as a drunk, depressed, but underneath-it-all-heroic character. Jeff Bridges plays Charles Howard as the eternal optimist, even in the face of great loss, and Chris Cooper doesn't stray too far from his overbearing father roles as horse trainer Tom Smith. Taken by the sum of its parts, Seabiscuit is formulaic – but it's a generally good formula. On the other hand, I've heard it described it as a History Channel documentary with better special effects, and that's not that far off the mark either. On most levels, however, the film does just fine. That is the movie's blessing and curse. It's that movie that could have been a Best Picture, but probably won't be.

The score by Randy Newman (The Natural, Pleasantville, Toy Story), is not nearly as by-the-numbers as the rest of the film. Although both film and score are satisfying, the score is everything that the movie should have been. Indeed, the score is good enough that it's difficult to know where to begin in describing its strengths. Throwing darts at random, I'll begin with the fact that Newman is the type of composer who knows a good opportunity when he sees it and doesn't let that opportunity go to waste. Much of Seabiscuit takes place along the United States / Mexico border, and with tracks such as "Marcela Agua Caliente," Mr. Newman takes that setting out for a spin to show us what he can do with it. He starts us out with a slow dance, and then speeds up into a satisfying salsa. He seduces the listener slowly, and then takes them for a ride to enjoy. This same Latin influence appears elsewhere on the score ("Wedding") and ("La Tequilera"), but most of the balance is more traditional Newman.

That "traditional" Newman, though, is damn good. His work on "The Crash" succeeds in accomplishing the all-important triple threat – (1) echoing the time (necessary in a period piece like Seabsicuit and The Natural), (2) supplementing what's happening on screen, and (3) surviving as a stand alone piece of music. This accomplishment is present throughout the score, and creates, if this is possible, an energetic sense of melancholic contentment ("Seabiscuit," "Frankie," and "Campfire" as three sterling examples).

At times, Newman resorts to somewhat shameless "Victory!" flourishes, complete with cymbal crashes ("Call Me Red," "Red's First Win," "Tanforan", and especially "The Derby") but considering that this is a film about horse racing, you can't really blame old Randy. Indeed, as much as you realize as a listener that Newman is blatantly manipulating your musical emotions, "The Derby" is a thrilling cue to enjoy. I actually found myself bopping up and down in my chair listening to it (don't tell anyone). Sometimes, as in "Night Ride Accident" and "The Unkindest Cut" Newman is able to take this energy, and give it a darker tinge. It's on those tracks that the score shows its powerful edge.

Overall, this isn't Newman's greatest work (personally, I've got to save that for The Natural or Pleasantville) but it is vintage Newman, and it's hard to go wrong with that.