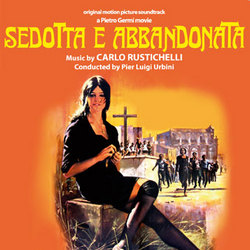 In Sicily the sixteen years old student (Sandrelli), gets sexual abuse from the promised husband (Puglisi) of her sister Matilde (Biggio). The father, notice of the event, tries to impose the shotgun wedding to the seducer who refuses because he despises the girl's compliance. A fake kidnapping is cook up as excuse for the wedding in front of people's eyes, but the parent will see the daughter Agnese's refuse, but in the name of the family' honor he will succeed to lead the couple to the altar dying cause of a heart failure really the day of the wedding, while the other daughter Matilde will close in a convent.

Sedotta e abbandonata can be considered as one of the absolute masterpieces of the Italian movie comedy as also the notable music score by Carlo Rustichelli. In 1964 C.A.M. issued a 33 rpm album (CAM Cms 30.086) containing 17 tracks and a length of 29:44, re-issued on CD (CAM CSE 084) and in Japan (SEVEN SEAS KICP 386). Thanks to the mono master tapes of the original session a big dream could come true for us, that is to release every note recorded at that time and so our CD has a total time of 70:09.

Rustichelli has written a memorable ballade with the style of the sicilian storytellers called "L'onuri di l'Ascaluni" and the love theme "Vampata d'amuri" performed by the voice of Pino Ferrara alternated to motifs sometimes funny and sometimes dramatic (like an epic Deguello theme that well highlights the hostile, almost western side of the plot) that evoke the recognizable style M° Rustichelli.

The inedit material contains several alternate takes of the album versions that shall make so glad the Carlo Rustichelli fans and this CD wants to be a sincere tribute to his Music Art.