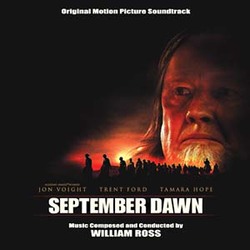 I remember watching Scream 3 when it came out in theaters and thinking the movie was possibly one of the worst I had seen so far. The funny thing is that Marco Beltrami\'s score is immensely enjoyable and creative. So what can one expect from the composer attached to one of the most negatively reviewed movies of the year? Anything, really.

September Dawn, a film about the 1857 massacre by Mormons of over a hundred Christians passing through Utah, has been called "strange, confused, and unpleasant" by Roger Ebert and "a made-for-TV historical treacle" by Ty Burr. William Ross, whom connoisseurs will remember from My Dog Skip, Tuck Everlasting, and Harry Potter and the Chamber of Secrets, was tapped to provide the score and he has delivered a restrained score that is touching without becoming sentimental and which harks back to the period with the use of a solo violin, acoustic guitar, and occasional whistle.

I must admit to having grown weary of traditional scores over the years: I welcome anything Mychael Danna and Rolfe Kent have to offer these days, anything to take me away from the maudlin cries of string chords and the all-too-familiar sound of the piano. Ross\' score to September Dawn is very conservative and traditional, as it should be given the period of the drama. It is not sugary on its own, although its combination to a trite love story and overacting on screen might bring out the simple carbs in its harmonies. The "Main Title" is a particularly lovely and somewhat dynamic piece, using an acoustic guitar rhythm to drive forward a scenic melody for the strings and whistle. The first cues continue to provide a gentle rhythm to the music but unfortunately that backing disappears pretty early on and the music becomes more stagnant. It is not a reproach but an observation: the album is a quiet one, its music tragic at times, always introspective and doleful, rarely agitated. Ross makes good use of the fiddle to bring out the pain of the event but also the burgeoning love of a young couple.

I found myself liking the strangely soothing sound of September Dawn, "strangely" since there is nothing soothing about a massacre but William Ross\' music is well crafted and delicate, never overbearing. I have already confessed that my tastes lie outside of the comfort zone and, as such, I cannot recommend it with the vim and vigor I muster for more experimental and original scores, like The Nativity Story, Brick, Year of the Dog, The Roost. Fans of more conservative scores and people who still enjoy basking in the depressing sound of minor string harmonies and piano laments will enjoy taking this one for a spin. Ross has definite talent and September Dawn showcases his affinity for wistfulness and warmth in music. I may prefer the sound of a bansuri or a ney, but September Dawn might just be perfect for a rainy autumnal day.