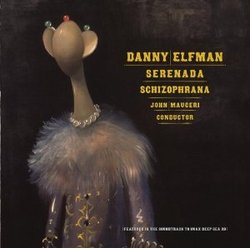 Serenade (n): a work for a large instrumental ensemble in multiple movements, usually lighter than other multiple-movement works for large ensemble (for example, the symphony), with tunefulness being more important than thematic development or dramatic intensity. (adapted from Wikipedia)

Danny Elfman is making his first steps in the concert hall and this multiple-movement work could not bear a better title than Serenada Schizophrana. It is indeed a collection of movements, quite distinct from each other and, while each of these movements spins individual themes and motifs, there is little sense of an overarching thematic development. Instead, it is a musical roller coaster ride through various little set pieces and landscapes, containing at times the orchestral majesty of Elfman\'s early career, his minimalist phase, and his more recent bouts of complex overlapping constructions and controlled dissonance. It never reaches the heights achieved in any one of these phases; indeed, nothing in the serenada comes close to the enchanting magic of Black Beauty, the simplicity of Batman, the careful minimal touches of A Simple Plan, or the imaginative craziness of Charlie and the Chocolate Factory. What it is, however, is a highly enjoyable collection of orchestral and choral movements that recall, to a certain degree, the entirety of Danny Elfman\'s career to date, serving as something of a best-of album of original pieces.

The first movement is entitled "Pianos" and begins with a muted and glossy motif in the higher pitches of the piano, soon accompanied by dissonant chords sounded by an array of gently stabbing woodwinds. The orchestral force grows stronger, recalling the growing musters of the first movement of Philip Glass\' eighth symphony. The culmination of this instrumental call to arms is a great action piece that reminds the listener of the best of Elfman\'s orchestral action set pieces. The higher brass and violins articulate a fierce action motif, which is given dynamic presence by the low punctuating brass and the numerous harp runs. Throughout the piece, the strings\' constant staccato bursts, the timpani\'s rumbling rolls, and the fast harp arpeggia give an aura of superheroism. Indeed, "Pianos", while generally darker and more dissonant than Elfman\'s work on Spider-Man and much closer to his unnerving score for Red Dragon, would make a great demo for a future Flash movie. The frequent changes in dynamics and the quick intercutting between different ideas reveal this concert hall work to be nothing more (and nothing less) than a thinly-veiled score to an imaginary movie. "Pianos" is a great action cue; it is a strong, ear-catching opener and one of the strongest movements of the serenada.

The second movement, "Blue Strings", is much more reserved than its predecessor, to the point where one wonders why Elfman needed to stretch it out to ten minutes, making it the longest movement of the serenada. It opens with distinct hints of the string ostinato from Red Dragon over a surging triple meter, where the first beat is quiet, the second beat climaxes, and the third beat recedes, giving the aural impression of slow waves. Woodwinds join the low strings, followed by the violins and the brass, but the whole cue, as the title suggests, belongs to the strings. As the movement progresses, quiet staccato motifs for the violins, violas, celli, and basses overlap and what began as a hint of Red Dragon turns into a veritable clone. The string-led suspense wears down and the cue becomes lethargic towards its end. For far more inventive string work, one needs only to go back to Elfman\'s own Dolores Claiborne, which made use of a far wider palette of experimentation. As it is, "Blue Strings" sounds like the demo Elfman wrote for Red Dragon and is, in a sense, wholly unnecessary.

The third movement is entitled "A Brass Thing" and begins with an offbeat accumulation of low brass rhythms giving the general impression of a march but one where a few crazy side steps find their way in. This belligerent march soon turns into a quasi-tango with jazz overtones, utilizing the full palette of brass (muted and otherwise) and woodwinds at the composer\'s disposal. The driving tango falls by the wayside at the three-minute mark to allow for a quieter section first led by the muted trumpet, then by a concert of flutes and unmuted trumpets. A breezy jazz atmosphere waltzes in, before a more traditional orchestral progression squeezes itself in there, recalling Charles Ives\' frequent mixture of classical and popular music. The rest of "A Brass Thing" consists of a repeated intermingling between the tango-like dance and the more improvisational flute-driven orchestral jazz. It is a more interesting movement than "Blue Strings" but is easily upstaged by what follows. A short movement, "The Quadruped Patrol", manages to insert itself between "A Brass Thing" and the rest of the serenada. It is an orchestral folly, a grin-inducing romp of canine mischief in traditional Elfman fashion, bringing to mind the sense of wild abandon of "Edwardo the Barber". Its double rhythmic theme is kept to the strings in the first half of the cue as an imaginary pair of mischievous dogs starts to run amok in the neighborhood, but it is picked up in a higher register by the violins in the second half, with full brass and faster ostinati for the celli. What was cute becomes alarming, and Elfman even brings in his trademark choir near the end, furthering comparisons to Edward Scissorhands\' more action-oriented cues, before the wild chase looses steam and decelerates to a stop.

The fifth movement, "I Forget", is a six-minute-and-a-half extrapolation of Elfman\'s signature sound, namely the way he composes for choir. An ensemble of eight female singers keeps to the high register and allows the frequent "ah" word endings to oscillate between two notes in the trademark Elfman melisma style. The big surprise is that the song is in Spanish; its fast pace and high pitches do not make the linguistic choice evident, however, and for some people, it might as well be Latin. The lyrics are available at http://www.serenadaschizophrana.com and, while they were not written by Elfman himself, they sum up the quirky, fantastical, and darkly magical worlds that Elfman\'s music has, especially in the early 90s, inhabited and breathed life into. The choir is given sonic preference, while a gentle accompaniment for light percussion and soft chords for the brass can be heard in the background. Elfman has said that Philip Glass is a somewhat recent inspiration for his music and, indeed, some of the flute work in this movement is reminiscent of Glass\' trademark minimalism. "I Forget" should please fans of the pre-electronics Elfman and it represents the second high point of the album.

"Bells and Whistles" is the apocalyptic, darkly heroic climax of this off-beat serenada, drawing upon ideas and stylistic -isms Elfman explored in Red Dragon. It is anything but a quiet piece for bells and chimes, utilizing the full power of the orchestra and the singers instead to conjure up a fast musical time bomb that outdoes the apotheosis factor of "Pianos". It is a great way of completing the main body of work that is presented and is, in fact, the third tour de force of the serenada. This helter-skelter collection of movements is sealed off with a quick fifty-second "End Tag" that is a reiteration of the quadruped rhythm, slowly coming to a stop as if the whole string section is finally letting off the steam that has accumulated for the past forty minutes. An improvisational piece for alto sax, strings, woodwinds, and chimes serves as an album encore. The instruments cook up a complex but restrained series of overlapping ostinati while the sax melody is similar in tone to James Horner\'s 2005 score to The Chumscrubber.

The creature on the album cover, with its soft, chalky costume, reminded me of Arnold Schoenberg\'s song cycle, Pierrot lunaire. Pierrot is, of course, the almost mythic representation of the sad clown and the lyrics to Schoenberg\'s songs touch such eclectic subjects as his wild adventures, his neuroses, and his obsession with that white lunar object. Elfman\'s Serenada Schizophrana does not, when calling upon the singers, dabble in Sprechstimme, the half-singing, half-talking pre-rap of Schoenberg\'s musical poems; but what it does have in common with the wild avant-gardiste explorations of the Viennese composer is this intricate superimposition of ideas­—mini-fugues, counterpoint, overlapping canons—which ultimately leads to a unique and unified effect. Serenada Schizophrana is a culmination of ideas given free reign: it is the accumulation of traditional orchestral ideas learned for Edward Scissorhands and Black Beauty, of experimental minimalism explored in A Civil Action and A Simple Plan, and of a more vigorous, almost avant-gardiste controlled dissonance arrived at in scores such as Red Dragon and Spider-Man. It is distinctly Elfman-esque and as schizophrenic as his current body of work. While two of the lengthiest pieces might not live up to expectations, the crazy glee and density of musical ideas in "Pianos", "I Forget", and "Bells and Whistles" make this an interesting and wholly absorbing side trip into the brilliantly demented mind of our community\'s own lunar Pierrot, Danny Elfman.