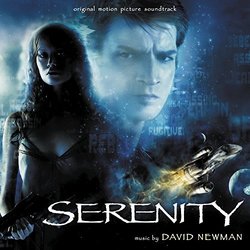 Here's how it is: Firefly got shafted, but it got a new shiny life on the big screen. River, that young brainiac trained by the Academy to be some sorta weapon, she's heard secrets from high up, whispers in her dreams, makes her dangerous. So the Alliance sends an Operative after her, calm and composed as he is, believin' the killin' of her's righteous, draws a parallel or two from terrorists of yore. So an angrier Mal and the gang, them's whole crew of Serenity, goes on escapin' this Operative, the entire Alliance, and them rapin', murderin' gorram Reavers. Edmonson's shiny fiddles and slidin' banjo tunes got left behind in TV Land; a man of the name Newman stepped in and got himself a bigger canvas. Don't go in there expectin' some sort of Firefly music; Newman hides his banjos and fiddles, gets your heart pumpin' with all sorts of electronics and synths and deranged sounds, notes no sane human should ever have to hear.

When River goes wild in that bar, kickin' folks and jumpin' up staircases, electronic beats of all sorts keep hittin' at you, with brass hits like bullets, and some deranged electric guitar slides to spice things up. That big space battle, with them Alliance folk on one side and an army of Reavers on the other, gets the beat right, with ever-changin' rhythms on pulses and snares of all camps, brass and strings gone wild, snippets of Serenity's Theme flowin' through like a gorram leaf on the wind. Them Reavers like their notes all over the map, no center, full of bangin' pipes and shrillin' violins. "Final Battle" sure is some crownin', with River livin' up to her potential, might make some folks 'member some other arse-kickin' heroine of the Whedon 'verse, all them drama strings leadin' up to soarin' violin ostinatos with racin' snare drums and that noble Serenity tune, all on shiny brass. Makes for one listenable action piece, not like others where noise is all it is, like "Escape" and "Mal & Op Fight", melodies cut short by all sorts of metals clangin' and bein' hit, and chains rattlin', and all sorts of electronic beats.

Them quiet moments of solitude and nobility get a theme heard in "Serenity", with a violin all languishin' over it, sad and melancholic, gets turned into an Irish jig o'sorts, with bouncy guitars and light perc, ain't no theme for a crew on the raggedy edge. River's got herself a shy piano theme, all hesitations and echoes, heard in "Population Dead". Strummy guitars get dusted off in "Going for a Ride", reminds y'all a bit of ole Firefly, all light and airy, nice rhythms carried on the wind. "Trading Station Robbery" is somethin' ole Greg Edmonson might've come upon. "Funeral"'s got some light piano and that violin, carries that Serenity Theme nicely, all sweet and shiny, with "Rebuiling Serenity" bringin' back that good ole guitar and some Newman strings. That good folks' melody just soars in "Prep for Flight" and "Love", before that shee-niou jig comes back for the curtain call.

Serenity's got some shiny moments when it don't try to be too folksy and gettin' jiggy, with the nice guitars of "Going for a Ride" and the beautiful violin of "Mal's Speech". Some of them action stuff gets pretty heavy, but Newman makes some nice use of his theme, leafin' through "Mal Decides" in full-on Reaver mode and "Space Battle", heroic and desperate. Experiments is what some folk would call much of the stuff on this here disc, with tamed vocals, synthy beats, lack o'tone shriekin' fiddles, metal pipe bangin' all clashin' together and no meter ain't beatin' in the background, keeps slidin' from right under you, music of a shiong-mung duh kwong-run. Don't go in there wantin' no Firefly music, with good heartin' banjos and fiddles, 'cause ain't any of that stuff here. What's here's edgy, and loud, but them beautiful moments know when to shine through from time to time. Ain't sure a bunch of crooks deserved such a upstandin' melody to guide them through the 'verse, but it sure is pretty to hear when it ain't dancin' around to the sound of them Irish spoons.

SoundtrackNet in no way condones making fun of people from the South, and disassociates itself with our French Canadian reviewer for the purposes of this review, and the Firefly review posted previously.