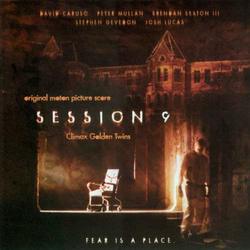 Directed by Brad Anderson and starring David Caruso, Session 9 is a surprisingly effective and haunting work that does what every low-budget movie should do, maximize the basic tools the medium has to offer (i.e. good, cheap locations) and deliver a solid visceral punch, without the benefit of extra cinematic affectations, like special effects wizardry.  The movie tells the tale of a group of asbestos clean-up workers doing a rush job on an abandoned insane asylum.  It was shot, appropriately enough, at an abandoned insane asylum.  One of the workers finds a collection of taped psychotherapy sessions with a psychotic patient with multiple personalities.  As we hear each session, the story progresses with the patient's insanity suspiciously (and supernaturally) mirrored in the actions of one of the workers.  You'll have to see the movie to find out the gory details.

Session 9 is not a jump-out-of-your-seat horror flick; it is all about creepy.  One look at the abandoned asylum and you want to head for the exit, but you can't; because you have to know what the place's "secret" is and what happens to this group of diverse, and somewhat sympathetic, men.  My main gripe would be that the film starts off with too much tension, with the guys already at each others throats, so by the end, all of the tension among them gets pretty old, and you as an audience member wants to take an axe to them all too.  The script would have served the film better with a more measured build of tension.  Having said that, we still care enough about these guys and their daily struggles that you want them to be okay as things start to go sour.  When we do find out the secret, it is not much of a surprise, but you don't leave too disappointed; the film effectively draws you in with a profound sense of dread and keeps you edgy for the duration of the film.

While the soundtrack by Climax Golden Twins is effective, it will not blow you away.  Making creepy music is pretty easy; making a comprehensive flowing creepy soundtrack is much tougher.  This film succeeds in getting us in the mood, but the music never is so unique and distinctive and thematic that you would ever remember it as "that Session 9 theme."  It would be unfair to say the composers failed totally; they didn't; they created a solid aural backdrop that sends chills up your spine.  What they did not do was put much of a signature on it.

Overall, the sound and vision of Session 9 is powerful and effective.  It won't change your world, but it will draw you in to its world for a couple of hours and take you on a good spooky ride.  If you are a horror fan, it's a must-see.  If you are not, and like to see new filmmakers that show promise, you should check it out as well.  If you're a sissy, go see Hardball.

As for the soundtrack CD, get it if you like the movie or if you want a good, creepy soundscape for a Halloween party or freaking out your annoying girlfriend.  It evokes a mood more than a specific film, and that's okay; it just isn't for everyone.