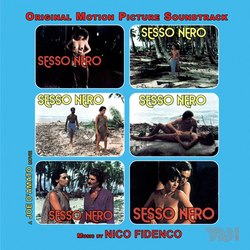 We continue releasing scores dedicated to the films of Joe D'Amato, and you know when the director pairs up with Nico Fidenco it's surely an ace in the hole. This particular soundtrack is from one of the popular director's Caribbean movies, Sesso nero, shot in 1980 in Santo Domingo and starring Mark Shannon, Annj Goren and George Eastman.

The alchemy had been already experimented with and duly tested—the Maestro had already proven to be well-inspired by isles, sun, beautiful women and the director Joe D'Amato. How can we forget the series directed by Joe featuring the gorgeous Laura Gemser and fully scored by the famous singer/musician?

Sesso nero continues along that trail, with sonorities that could have been composed for the divine Laura but that in reality take their own path, making us understand that they have been composed for another movie that simply reminds us of the Black Emanuelle series perhaps because of the exotic setting and for some stylizations that do not altogether inhibit them from existing autonomously.

A CD full of funk, sweat and disco, lounge and exotic atmospheres—it's a score overflowing with sun and eros that will accompany your summer cocktails and set your imagination free... The CD is released in jewel case, with mastering by Claudio Fuiano, graphic design by Daniele De Gemini and Alessio Iannuzzi, and liner notes by Fabio Babini on the music, the movie and the actor George Eastman.