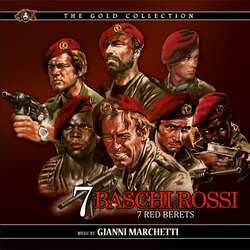 An LP with 16 minutes of score (coupled with Marchetti's own I vigliacchi non pregano from the same year) was released by CAM in 1970. Kronos Records is proud to present this soundtrack for the first time ever on CD format. The first eight tracks of the CD contain the program as featured on the original CAM LP, reconstructed from the original 1969 scoring sessions. The remaining 23 tracks of the CD are the rest of the cues as heard in the film and features also music not used in the final version of the film and for the first time availably on any recording.

A must for lovers of the genre. A highly original score by the sadly missed Maestro Marchetti.