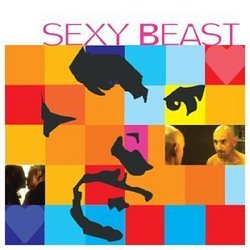 Sexy Beast is a strange beast of a picture.  It blends cheeky humor with a hard-edged, though somewhat standard, gangster plot revolving around a ruthless thug (Ben Kingsley) who goes to Spain to bring back a retired gangster chum (Ray Winston) for one last job.  The blend of humor and wickedness makes the first 2/3 of the film a fun ride, but once the main source of threat (and humor) leaves the picture, the film becomes an empty shell of what it was.

Similarly, the soundtrack has a bounty of flare but a dearth of cohesiveness.  Ranging from celebratory Henry Mancini to hard-edged techno UNKLE to atmospheric Roque Bańos, this soundtrack gives you a good sense of the range of tone the film has.  There are moments of fun, moments of tension, and moments of true tenderness, and this soundtrack has something for them all.  The music choices are right on the money and really do push scenes to a higher level.  However, like the film, the soundtrack lacks a sense of coherence.  There a number of great scenes and moments, but nothing ties them together.

The soundtrack CD is strewn with dialogue and sounds from the flick, so it is certainly not the best opportunity to hear the various artists' work.  So though the soundtrack serves the film reasonably well, the CD is only for the movie's fans. Having said that, if you are a fan, this CD will really get you in the Sexy Beast mood.  It evokes the film, for better and for worse.