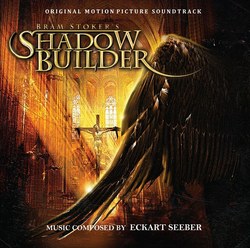 Eckart Seeber's score for Shadow Builder is an epic, Gothic orchestral score with a choir added in for the religious undertones of the film. The music features several memorable recurring themes, including the omnipresent Shadow Builder theme for our titular villain or Vassey's theme for the renegade priest in hot pursuit of the cult members. The music is also remarkable because after a previous score had been rejected from the film, the composer had 6 weeks to write all the music you hear. The score for Shadow Builder was recorded by the Ukrainian State Radio and Television Symphony Orchestra and Chorus under the direction of conductor Vladimir Sirenko.

A shorter version of this score had previously appeared on Seeber's own Sonovide label, but this new release by KeepMoving Records contains the whole work with about 20 minutes of previously unreleased music, plus a handsome packaging with a 12-page booklet featuring liner notes by Gergely Hubai, discussing the creation of the film and score based on interviews with the director and the composer.