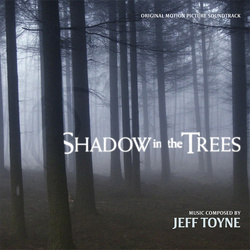 Shadow in the Trees

Review: Shadow in the Trees

It has been observed before and I will reiterate it here: Jeff Toyne demonstrates an amazing maturity in his score to Shadow in the Trees. It\'s his attention to detail and nuance which is most striking here. To be fair, there are probably at least five people that deserve to share the credit on this one: the orchestrators (Jeff Toyne, Flavio Motalla, and Brad Warnaar), the sound designer, Bryan Carrigan, and the mixer, Vince Renaud. Shadow in the Trees will not hit you over the head with bold themes. Rather, it is a headphone kind of score, one to be listened to carefully in the dark, its rich, disquieting music being fed directly into your ears.

The director and lead actor in the film, Chris Smith, lost his father in 2004. The film itself centers on this event as young Joseph loses his own father during the passing of a comet and sets off, six years later, on a quest to reach closure. While that brief summary may sound like Toyne cooked up a sugary score, the reality is quite different. The music is often somber, at times sinister, and occasionally frightening, adroitly mixing orchestral and electronic elements into a seamless tapestry that is as impressive as it is effective. It is remarkable to hear such a finely crafted score for what is essentially a little seen movie edited by a UCLA student. It features touching solos by the violin, which can be heard carrying the melody in "The Church" and providing a folksy rhythmic backbone to the "Opening Titles". The piano is mainly used to state a quiet aborted figure which recurs in the score, a running melody both childish and melancholic. And one would be amiss to forget the subtle contribution of Melissa Kaplan, a singer whose bewitching voice I last heard gracing the score to Robotech: The Shadow Chronicles. Like most of Toyne\'s instruments and effects, her singing is used sparingly and effectively.

There is also a slew of auditory tricks beyond the standard orchestral elements which delight the ears in Shadow in the Trees. Toyne makes potent use of a creepy sound towards the end of "Morning Jog", a swampy frog\'s croak that wriggles from speaker to speaker (or earbud to earbud), reminding us that something is amiss. It is one of the many effects the composer uses in the more horrifying cues of the score, each sound carefully chosen and mixed in with the rest of the music. Once in a while, such as in "Final Confrontation", Toyne unleashes the power of a percussive ensemble, strings, and brass to create a dynamic sequence of the "run for your life" variety. There is little in Toyne\'s approach here that is one hundred percent original: unlike a score like Mike Andrews\' Donnie Darko, Toyne does adhere to certain conventions. But its effectiveness and the amount of work that has been put in its design and assembly cannot be denied. Shadow in the Trees is the work of a team of perfectionists: it is professional, mature and, most important of all, damn good.