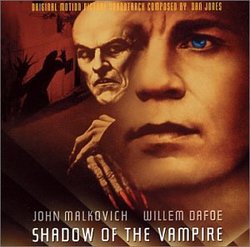 Shadow of the Vampire

Performed by
The BBC National Orchestra of Wales

Review: Shadow of the Vampire

It seemed like a rather interesting and entertaining idea. What if Max Schreck, who played "Count Orlok" in the classic German silent film Nosferatu actually was indeed a vampire? What if director F.W. Murnau was so obsessed with completing his film that he would go to any lengths - even sacrificing his lead actress - to get the shots he wanted? Those concepts are explored in the wacky yet disappointing Shadow of the Vampire. While Academy Award nominee Willem Dafoe is excellent at Schreck, much of the film is slow in pacing and not as exciting as I would have liked. Still, the recreations of the original film sets and shots are neat to see, and Dan Jones' lush and dark score is a definite highlight of the film.

The soundtrack album begins with "A Street in Wismar", which contains some sound effects in addition to Jones' score. The score is ominous and string-heavy, casting a shroud of darkness over the film. "The Bunker" features a tense rhythm that explodes into a rather Elfman-esque outburst of brass and woodwinds.

Many of the cues feature sound effects, which I felt detracted from the listening experience of the soundtrack. If I wanted to hear sound effects, I would see the film! However it should be noted that these sound effects do add a certain level of creepiness to the album. There are also a number of source cues on the album, featuring a small ensemble in front of a live audience. They are period numbers, and fit the small German cabaret style one would expect for that time period.

"The Ship Building Waltz" is an excellent cue, featuring a solo piano that slowly builds into a full orchestra. It's a sad cue, making us wonder who is more of the villain - the vampire Shreck, or the director Murnau. "Title Music" is played over the opening titles of the film, a very long and drawn out sequence featuring some art-deco designs never seems to end. While the cue itself is a great introduction to Jones' score, the sheer length of it (over five minutes!) made it an almost intolerable opening to a film that ultimately disappointed me.

The album runs about 50-minutes in length, and is a mixed bag. While Jones' score is quite good, the sound effects make it hard to listen to. Additionally, the repetitiveness of some of the cues feels as though some tracks were included for completeness's sake, as opposed to listenability. However, don't let the technical issues steer you away from the soundtrack. You might be pleasantly surprised, and it's certainly worth taking a listen to.