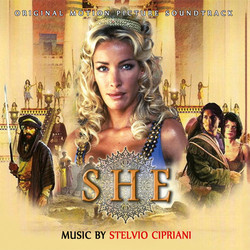 Kronos Records proudly present the CD soundtrack for Timothy Bond's She, an Italo-German coproduction from 2001.

The music is composed by one of Italy's most Iconic composers, Maestro Stelvio Cipriani. Cipriani's score is a powerful one, filled with lush and rich sounding thematic material that would not be out of place in one of the many epics as produced by Hollywood during the Golden Age of cinema or even because of its appealing and alluring melodious persona might be mistaken for any of the works of Angelo Lavagnino, Carlo Savina or Carlo Rustichelli when either of the three Maestros worked on Italian made sword and sandal sagas. Mysterious, romantic and filled with drama and apprehension.