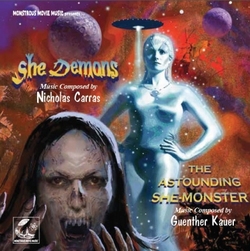 She Demons / The Astounding She-Monster

She Demons & The Astounding She-Monster offers music to watch girls by—girls who want to kill you! This fun CD opens with Nicholas Carras' rousing 1958 score for She Demons, which will get your toes tapping with its jungle drum rhythms. Besides demon-dance tunes and horror cues that'll make you never want to be alone with a woman again, there's music for evil Nazis, volcanic eruptions, and even some island romance. You'll enjoy spending some time with these feminine fiends who've definitely got the beat!

One thing you can say about Guenther Kauer's 1957 score for The Astounding She-Monster—it's astounding! Unlike any other soundtrack from a 1950s horror movie, it's impossible to guess how Kauer was inspired to create something so inventive for such a lackluster film about a deadly female extraterrestrial. You might also recognize the score from its re-use in Tor Johnson's The Beast of Yucca Flats!

This release contains almost an hour of music and features riveting cover art by the legendary Vincent Di Fate.