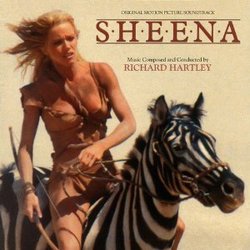 I've never seen Sheena. Or if I have, the memory of it has been obliterated by the ravages of time and lead paint chips. The movie is set in Africa - Sheena being conceived as a male version of Tarzan mixed up with snippets of H. Rider Haggard's "She Who Must Be Obeyed" - not that you could tell that from listening to the soundtrack. Except for the percussive "African Ballet" track there are none of the cultural cues we've come to expect in a modern soundtrack. And, really, it feels vaguely insulting to suggest that percussion alone is enough of a signal for the culture of the entire continent; the percussion could just as easily be a nod towards Japan's taiko drums.

Even if you've never heard of Sheena it only takes about 20 seconds of the first track to date it fairly accurately: the Chariots of Fire-style electronica says "early 80s" louder than the cover of Tanya Roberts on a zebra. Composer Richard Hartley limits his Vangelis channeling to only a few tracks: "Sheena's Theme", "End Title", and portions of "Marika and the Water Deer" and "Shaman Taught Me". The remainder of this brief disc are standard arrangements and the kind of paint-by-numbers soundtrack you'd expect a schlocky B-action movie to sport.

"Introduction / One Way Ticket" is the big, brassy introduction to wonder and tumult of Africa. "Climb! / Young Sheena" slowly builds up tension as Sheena no doubt attempts some difficult task, climbing to a crescendo she accomplishes whatever task it is that's been set her, followed by sedate strings as she inevitably contemplates her achievement, and a second mild climax as Leonardo DiCaprio holds her over the bow of the boat.

"Shaman Taught Me" is the low, introspective track with the simple melody as Sheena probably deals with a great loss, reflects upon her past, and reaffirms her resolve to beat the bad guys. "Come On Vic Casey" is the love song supported by lush strings as they ice skate in Central Park and look into one another's eyes.

The most surprising thing, other than the mere fact of this limited (and now sold-out) Varese Club release, is how little dramatic tension and action the soundtrack conveys. I gather that Sheena is something of an action movie as hired assassins try to kill Charlie's Angel and Blossom's dad. Yet none of the pieces seem to fit in to that type of movie. Instead they generally have the slow, langorous pacing I would associate with something more like Out of Africa. I suppose we have become a bit spoiled by Bruckheimer's perfectly tuned action vehicles.