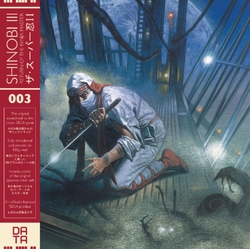 With music composed by Hirofumi Murasaki, Morihiko Akiyama and Masayuki Nagao, Shinobi III is a relentless bass-driven soundtrack which, upon its release in 1993, pushed the Mega Drive's audio capabilities to its limit. Its strong percussive elements are something of a technical marvel and, like all of the greatest soundtracks of the 16bit era, showcases the ingenuity and resolve of game composers when faced with extremely limited hardware.

180g vinyl packaged in a 400gsm matt finish sleeve with traditional OBI strip. All copies also include a foldout poster featuring the original Japanese artwork, sourced from the SEGA archives.

With audio sourced directly from a Japanese Model 1 Mega Drive (AV Intelligent Terminal, VA5 with stereo output mod) and painstakingly remastered for vinyl, this release should appeal to anyone with even a passing interest in video game culture, FM synthesis or electronic music in general.