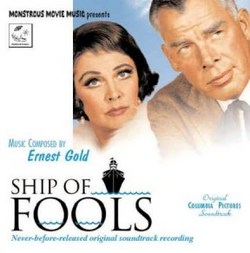 Ship of Fools is one of the most-desired scores by the incredibly-talented Ernest Gold. Nominated for 8 Academy Awards, this 1965 star-studded powerhouse drama features a magnificent "Main Title," a memorable love theme, and more original Viennese waltzes and dance cues than you can shake a ship at. Gold displays his gift for melody in this unique and delightful score that emphasizes chamber music over bombast.

A "concertized" re-recording of the score by The Boston Pops was released on record album in 1965, but this is the premiere release of the original soundtrack conducted by Gold, including twice as many compositions as were on that out-of-print album.