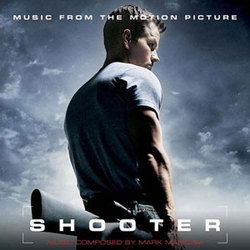 For some reason, when I saw the ads and clips this seemed almost an update of First Blood, but I know now that Shooter is really one of those "falsely accused"-type story setups, with Mark Walhberg playing an expert marksman (well, he has to be an expert at being "mark"!) who is framed for an attempted presidential assassination.  When I ruminate on the parallels in the action genre further, The Hunted from 2003 is actually more of a modern-day Rambo.  The action here in Shooter is directed by Antoine Fuqua, who has helmed other brawny pics such as Training Day and King Arthur, and utilized composer Mark Mancini on such past projects, alternating with Hans Zimmer, not unlike how Paul Verhoeven once alternated between Jerry Goldsmith and Basil Poledouris for his films (how strange to realize that both of them have now passed away?).

The album from Lakeshore Records features over 50 minutes of Mancina\'s score, plus an end credits tune performed by Otis Taylor.  In moving from the "Main Titles" and on through the following three tracks, the setting is firmly entrenched in grungy, groove-oriented atmospherics with swaths of long-lined string and horn backups.  There is electric guitar and synths added for color and every now and then a single trumpet is heard piping above the tense collage.  It is in the same vein as the music Sean Callery provides for the television series 24 each week, except that Callery does not have a live orchestra with which to play, as Mancina does here.  Or one could even say that composer James Newton Howard led the way, starting with his 1993 groove-oriented score for The Fugitive, which still resonates, but that large amounts of active, up front melody and orchestral activity.  However, in Shooter the atmosphere and grooves appear so thick that no melody or recurring motif is allowed to emerge.  Even a track such as "River Barge Escape", which one might expect a bit more punch from the brass or at least a string ostinato, there is only electric guitar sizzle, thudding percussion and drones from either the strings and/or brass.

In "Infiltrating the Cabin" a three-note chord progression in the horns expands the palette a bit while the track closes with some active, nervous string work.  "Recon Report / Motorcade" continues the ominous atmosphere, though the pace picks up in its latter half with a snare drum riff and more prominent work for the orchestra.  A piano is added to the mix in "Swagger Finds Sarah", most likely to tell us that now is the time for the feminine, emotional component in the story while the lengthiest track at eight minutes, "Meeting In The Mountains", opens with an exciting pulse before moving back into tension with the electric guitar, synths and percussion.  The three-note motif returns in the brass as the thudding accompaniment falls briefly silent, leading to a brief but surprisingly riveting burst of orchestral action.  The remainder of the track settles back into the thumping atmosphere again, with a little warmth provided by acoustic guitar.

"Assassination" features another taste of the orchestral cutting loose once more, with furious string ostinatos and punchy brass accents, as electronic rhythms rule "Memphis\' Theory".  A solo trumpet emerges in "Brothers in Arms" before another pulse-pounding flurry of action helps to wrap up this track.  A quiet moment for "Sarah and Swagger" is bathed in synth drones and acoustic guitar strumming, providing respite until the explosive finale arrives.  The pace is still set electronically, but the orchestra plays a confident role above it all, the solo trumpet getting center stage again.  Rattling percussion and jangling guitars provide more momentum here, while "Revenge" allows the gritty tones to dominate in full-on rock mode.  A brief reflective coda for strings follows, cut short by the song "Nasty Letter" by Otis Taylor.

I found that the score recovered in some ways from a disappointing beginning, which was quite generic and non-descript, with no quality to give it a unique personality.  Improvements arrived with a more active orchestral element in "Meeting in the Mountains", "Assassination" and "Brothers in Arms", so I was happy to hear the score move in this direction, however I am not sure I can recommend this album to anyone besides those following Mancina\'s career.  There is not enough memorable material to take away from the listen and while it obviously provides the film with a constant tense pulse, I find this can be also result in an impenetrable, soulless wall, preventing the audience from connecting emotionally to the film\'s characters.