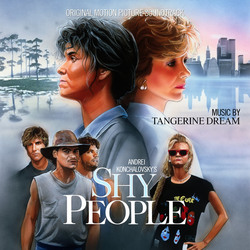 To score Shy People, director Andrei Konchalovski, who was a classically trained musician himself, was looking for someone to create an extra dimension through the music that would enhance the visual qualities of his film. Konchalovsky flew to West Berlin and met with band members Edgar Froese, Christopher Franke, and Paul Haslinger in their studio to discuss in detail his preferences for the music, staying for several weeks as the process developed.

When scoring films in their Berlin studio in those days, Tangerine Dream would deliver their finished music mix to the production company, and from then on wouldn't be involved with the final mix. In this film's case, it was left to Konchalovsky and supervising music editor Virginia Ellsworth and her team (assistant music editors Robin Katz and John Ganem) to edit the tracks and place them against scenes that Konchalovsky felt they'd be most effective. The band would be responsible for shaping the music into a listenable presentation.

An early compact disc release from 1987 for both Silva Screen Records and Varese Sarabande and very scarce, Dragon's Domain Records is excited to bring it back into the marketplace, newly remastered by Digital Outland and previously unreleased music. The booklet includes exclusive liner notes written by author Randall Larson, with the participation of composer Paul Haslinger and music editior Virginia Ellsworth. This release is a limited edition release of 1000 units.