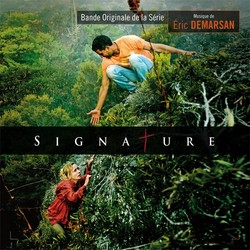 On the score for Signature, Hadmar said: "We discuss the orchestration with Éric. I talk of "woodwinds" and "wind instruments." So many avenues for various possible types of instrumentation. I talk about illiteracy and Toman's social breakdown. To me, the music to accompany his dash through the forest in pursuit of his victims should betray this dissolution. We bring up Herrmann and Bartók both at the same time. Éric quickly comes up with the "hunt motif": a short harmony repeating three or four times in a decrescendo and reminiscent of an echo. The echo of the hunter's internal radar. The echo of Toman's gaze as he loses himself in the forest, in search of his prey. Toman generates from this a rough, unstructured musical piece... Thanks to the part of Daphné, the melody, even if not quite exuding happiness, allows some sunlight to be shed in the six episodes of the series."