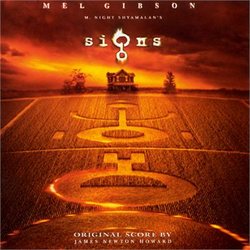 Let's get one thing straight and out in the open: Hitchcock and Herrmann would be proud.  I know that you are thinking, "Well, that's an obvious opening, isn't it?  He must have read at least one review of the movie to come up with that one."  To some degree you are correct in that assessment, but bear with me for a few more lines.

The press has dubbed M. Night Shyamalan "the next Hitchcock" and "the next Spielberg."  Those monikers seem to have come about from the director's clean, clear storytelling style, distinctive atmosphere, love of sharing the common man's tale, and, above all, infatuation with MacGuffins.

"MacGuffin" is a Hitchcockian term that describes the red herring a director puts in front of an audience to drive the plot forward and to keep attention away from a movie's real subject matter.  Shyamalan' The Sixth Sense famously kept our attention on the psychologist's need to redeem himself and his relationship with the young boy so we would not notice the obvious facts of his existence until the end.  With Signs, crop circles and their meaning keep our attention.  These are obvious and have been pointed out countless times, but I believe there is another MacGuffin most have accepted, including you reading this review – Shyamalan, along with composer James Newton Howard, are invoking Hitchcock and Herrmann to receive initial praise and acceptance for emulating those masters.  This clever MacGuffin allows the fresh, new elements they incorporate to blindside the audience who has come expecting a Hitchcockian thriller, creating even more suspense as viewers are thrown off balance.  It is easy to do what you want when people are looking the other way.

Howard's score for Signs is his best collaboration with Shyamalan to date.  The director's recent style has been deliberate, quiet, and creepy and the composer has supported that feel by creating atmosphere (remember the human breaths in his Sixth Sense score?) while, for the most part, staying out of the way.  Howard's score for Signs continues that tradition by slowly creeping under the skin, barely noticed.  Indeed, for much of the movie there is absolutely no underscoring.  Yet each time a cue appears, there is a little more motion, a little more sound, steadily generating enough tension to power the theatre until it finally blossoms into revelation and catharsis during the final cues, "The Hand of Fate - Parts I and II".

The movie opens with simple title cards announcing the production's major players.  Howard's score opens with a nod to two of his greatest influences, Ligetti and Penderecki, with strident string tone clusters, much like the former's Atmospheres.  After this 30 second homage, one that Herrmann, who had an interest in the European texturalists, would have appreciated, Howard launches immediately into an ascending string figure that strikingly recalls Herrmann's work for Psycho in instrumentation and motion.  The string tone clusters are never far away, however, and rest underneath this figuration, eventually being overtaken by brass and percussion that sweep the ascending figure into a frenzy that eventually ceases, rather than really ending.  This short opening cue is one of the year's most effective main titles.

Signs then moves on to the task of building up audience expectation.  Howard accomplishes this by utilizing a post-minimalist language reminiscent of John Adams' work from the late 1970s, the period of Shaker Loops.  For example, consider the second cue, "First Crop Circles", which establishes the movie's main theme (one I call the "fate" theme).  It is a deceptively simple theme in C, consisting of three notes and two intervals: a tritone followed by minor second.  A rest of equal value to the notes follows the last note and the figure is then repeated, and repeated, and repeated, and finally modulated.  The continuous resolution of the tritone is disorienting while it is comforting, a wonderful metaphor for the entire movie.  Shifting chords and tone clusters not unlike the opening one accompany this fate theme and help shift its nebulous mood according to onscreen needs. (Ed. - the shifting chords are reminiscent of Howard's work in Grand Canyon.)

Every other theme in the movie can be seen as an extension of this fate theme.  Listen to the beginning of "Brazilian Video".  The opening theme is the fate theme again, only with the first interval descending and the second one remaining an ascending one.  Another slight alteration occurs when the family looks to the skies, as in "Baby Monitor".  The fate theme is opened up past a perfect fifth to encompass a major sixth, providing a palpable feeling of airiness.  "Into the Basement" combines a variation of the fate theme with the original three-note theme over string and trumpet tone clusters in two distinct tonalities.  This combination of two familiar thematic variations in two separate keys creates a genuinely unsettling atmosphere out of association.  Howard's incredible reliance on one theme and its complete exploitation is one of the best examples of musical minimalism I have heard in a movie score, yet he uses percussion to accentuate the action and key relationships to establish tension and release so well that it rises above any pedantic classification I could provide.

The MacGuffin seems to be working.  There is a huge temptation for me to tell you how Howard, like Herrmann, places every note so that it perfectly complements onscreen occurrences and reflects the director's style in every aspect; how he uses the orchestra just like Herrmann did in this Hitchcock movie or that one.  Yet I have tried to show you the ways in which Howard is using the musical language of his era in his own unique way.  The best advice I can give you, though, is to go out, buy this score, and look past the surface similarities to plumb its depths.  Signs is certainly one of Howard's best and one of the best this year.  So go, give it a listen, and try not to get too caught up in what Mr. Herrmann - I mean Howard - expects us to hear.