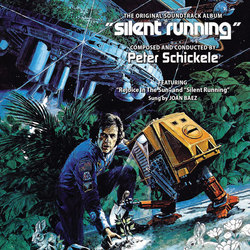 At long last, Intrada presents Peter Schickele's much-sought after science fiction score to the 1972 Universal Pictures film Silent Running. Director Douglas Trumbull's pursuit of Joan Baez to provide songs for the movie led to one of the most unusual and haunting science-fiction movie scores ever written-from a musical talent known far more for his comedy than for his serious compositions. Trumbull had noticed the name Peter Schickele as an arranger on some of Baez's albums and sought him out to write music for Silent Running. Schickele's score is lyrical, taking its cue from the film's opening macro-cinematography of tiny animals- snails, rabbits and frogs-going about their lives in what amounts to an outer-space terrarium. Schickele's score is relatively brief, and the original 1971 Decca album featured almost all of his music, as well as Baez's three vocals. An exhaustive multi-year search revealed a disillusioning discovery - every master element had vanished. With the album continuing to receive numerous requests for release on CD, Intrada proceeded using a new copy of the original vinyl release. Because Schickele's music is very transparent and involves a unique and masterful use of very exposed "high end" instruments (extreme upper-register left-hand piano, high electric piano, orchestra bells, crotales, triangle, marimba and glockenspiel), Intrada was very judicious in applying noise reduction, leaving just enough "air" around the delicate passages to retain what in actuality is part of Schickele's intimate musical soundscape.