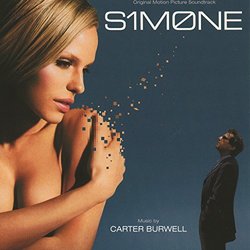 Andrew Niccol's satirical take on Hollywood celebrity, Simone, did not fare too well at the box office.  It just didn't seem to connect with the audience, and while the premise seemed like a sound one, in the end, it didn't succeed.  For the project, composer Carter Burwell provided a fresh contemporary score that underwrote the dark humor in the film.

For the most part, the score contains all of the expected Burwell touches.  It ranges from upbeat and quirky ("Nicola Walks"), to serious and almost romantic ("Sorry", "Hollywood Love").  Burwell's use of a band with a rather varied rhythm section allows the score to keep the momentum going, and not get too bogged down by the rather dour and melancholy dramatic cues.

There are a few electronic-heavy (almost ambient) cues on the disc (such as "Splendid Decay"), and they don't feel like they fit in entirely with the rest of the score.  Towards the end of the album, as things start to get heavier and more dramatic, the orchestration takes on a more traditional sound.  "Killing Simone" is a very good example of that, running over six-minutes long, and fitting snugly into Burwell's more orchestral style.

The album is overall a light and fast listen.  Running about 41-minutes long, it's satisfying to play through, and the band ensemble cues are fun and breezy.  The dramatic stuff holds up well, and while in the end this isn't anything truly notable, it's a satisfactory effort nonetheless.