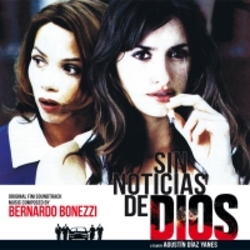 Sin noticias de Dios (aka Don't Temp Me, 2001), starring Penélope Cruz, Victoria Abril and Gael García Bernal, is a black thriller-comedy about the bizarre story of a boxer whose soul is disputed by a secret agent from the heaven (Abril) and another from hell (Cruz). The unusual, powerful and also bizarre music composed by Bonezzi, performed by The City of Prague Philarmonic Orchestra, was nominated for the Goya Awards (the Spanish Oscar) and won the Spanish Critics Award for Best Film Score in 2001.

The drama-thriller Nadie hablará de nosotras cuando hayamos muerto (1995), starring Victoria Abril, Pilar Bardem and Federico Luppi, was the first collaboration of Bernardo Bonezzi with Diaz Yanes. The innovative and short score, written for trumpet, saxophone, electric guitar and electronics, won the Goya Award (the only in the Bonezzi's career). In 1997 was released a promo CD with the complete score (18 minutes), but this album marks the first official and commercial edition.

Two opposite faces in the work of an essential composer in the history of Spanish cinema.