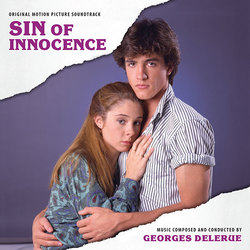 Sin of Innocence / Love Thy Neighbor

For Intrada's latest release from the 20th Century Fox catalog come two TV movies from the mid-'80s scored by none other than Georges Delerue. Produced by 20th Century Fox Television for broadcast on ABC, the 1984 TV movie Love Thy Neighbor was something of an inversion of the also-Delerue-scored The Woman Next Door. In that 1981 Truffaut film, a pair of ex-lovers, now married to other people, wind up as neighbors and rekindle their affair. By contrast, Love Thy Neighbor tells the story of a man and a woman who find solace in each other when their spouses run off together.
Showcasing his versatility as a composer, Delerue's music for Love Thy Neighbor is divided fairly evenly between underscore and source music. This being a comedy, the tone never grows too heavy; Delerue lifts the mood with high-spirited melodies, initially featuring flute and strings. The telefilm debuted on May 23, 1984, and was a ratings victory for the network, winding up the most-watched program for the week.

As with Love Thy Neighbor, Sin of Innocence deals with the fallout of divorce, this time through the lens of the children involved. Bill Bixby plays a widower who marries a divorcee played by Dee Wallace Stone. Their combined household thrusts together teenage son (Dermot Mulroney) and teenage daughter (Megan Follows). The newly minted step-siblings' relationship is tense at first, but soon becomes affectionate—and then blossoms into something more. A lot more. The stakes for the telefilm's star-crossed young protagonists feel more urgent and consequential, and this is shown in both the quantity of dramatic underscore and the overall tone, which is lush and at times bittersweet. The palette is orchestral, though enhanced in places with synthesizers, and electric guitar (delicately performed) provides a contemporary flavor. Sin of Innocence premiered on CBS on March 26, 1986.

Both scores were mixed and assembled by Mike Matessino and Neil S. Bulk from the stereo sessions elements stored at 20th Century Fox.