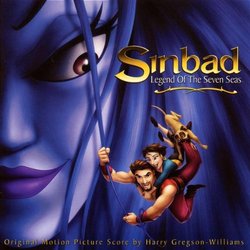 Sinbad: Legend of the Seven Seas

Everyone likes surprises, right?  We all love the nervous-with-expectation feeling that makes us barely able to sleep the night before Christmas, dreaming of the coming dawn.  When Christmas morn finally arrives, shining with hope and tinsel, we rip into packages usually surfacing with one of two comments: "It's just what I wanted," or "Um, thanks for the underwear, Grandma."

In many ways, reviewing scores is like Christmas every day.  New scores arrive shiny and new with no idea what treasures they may hold.  Unfortunately my Christmas morning response to the majority of scores is of the latter variety rather than the former.  But today I have the pleasure of revealing one of the most wonderfully surprising summer scores that easily outshines the movie for which it was written.

Anyone who has followed Dreamworks' blossoming animation department has come across the name Harry Gregson-Williams.  Along with Media Ventures collaborators like John Powell, Gregson-Williams scored Antz, Chicken Run, and Shrek for the studio.  Yet, even with such high profile successes, he has yet to achieve the fame of his Media Ventures colleagues.  With Sinbad: Legend of the Seven Seas, Gregson-Williams will hopefully find his audience as he clearly demonstrates that the whimsical tone and thematic flair evident in those other animated movies was not a mistake nor purely the product of collaboration.

For Sinbad, one of two pirate movies out this summer, Gregson-Williams has taken a kitchen sink approach.  This score is bursting with themes, styles, and genres, all riotously thrown together.  Never subtle, it is pure pastiche, containing every pirate movie trope but playing with them with such abandon that the listener is swept away from the very opening.  With more than twenty tracks, I can only share a few of the highlights:

"Lighting Lanterns" - the most percussion-heavy cue, "Lanterns" opens slowly with deep organ pedals laying a foundation.  When the percussion sets in, it does so in a lively, asymmetric rhythm underscored by choir punches rising through the sixth and seventh to the tonic.

"The Stowaway" - aptly demonstrates the use of instruments outside the traditional Western orchestra.  The lilting, popping guitar work is Mediterranean-influenced while the cello bassline plays a supporting habanera rhythm.  Much of this score, from the vocal work to the instrumentation betrays a non-Western influence.

"Sirens" - opening with a solo female vocal line (supplied by Lisbeth Scott) which is quickly joined in counterpoint by a trio, this cue is deeply reminiscent of Danny Elfman's work on Edward Scissorhands.  A beautiful, quirky cue, it is easy to fall under the spell of its song as the voices and instruments play in counterpoint through ecstatic trills and leaps.

"Is it the Shore or the Sea?" - the flute work, closely imitating Scott's vocals, is lovely in this quiet and introspective cue that nicely balances the usual brass and choral bombast that characterizes this score.

Sinbad of course contains the usual action cues, such as the sprawling "Tartartus," but it is in the lighter, less obtrusive ones that Gregson-Williams shines.  In them you hear his craftsmanship and obvious joy in the work.  Hardly original, Sinbad is nothing more than a rollicking good time, the type of score most summer movies ask for but never receive.  It is a delightful confection of a score, a bon bon of mishmashed styles that goes down surprisingly easily.  And if I happen to personally know you, who knows, there might be a Sinbad score underneath the tree for you this year.