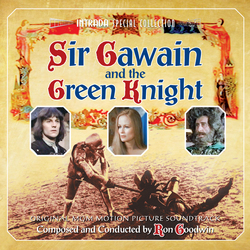 Sir Gawain And The Green Knight

World premiere 2-CD release of the thrilling Ron Goodwin score for the colorful Stephen Weeks film Sir Gawain and the Green Knight, an unusually mystical episode of King Arthur and the Knights of the Round Table legend.

The film stars Nigel Green as The Green Knight, challenging all to best him, and Murray Head as Gawain, rising to the task. Numerous battles across the realm inspire Goodwin to compose a colorful adventure score brimming with bold, rhythmic energy, and a sweeping melody.

Sir Gawain and the Green Knight offers many duels with lance, axe and sword, and Goodwin responds with extended brass fanfares over thundering rhythms that propel combatants onscreen. Offering contrast is a gorgeous minor-mode love theme.

Also getting spotlight throughout the score is an imposing four-note motif for low brass that heralds many appearances of The Green Knight. Adding yet another layer of musical color is mystical, impressionistic material for strings, harps, and vibraphone that highlight the fantasy elements of the tale.

Goodwin actually scored numerous sequences twice for post-production changes in the film, sometimes beginning cues in an identical manner but then going in vastly different directions.

Intrada presents the entire score recorded by composer Ron Goodwin at Anvil Studios in England, mastered from beautiful 1/4" two-track stereo masters vaulted by Goodwin's estate and licensed courtesy of MGM. The 2-CD set includes every original cue, as well as each re-scored sequence, delivering a dynamic musical journey through the ages!

The handsome package design is by Joe Sikoryak, with informative notes by John Takis. Ron Goodwin conducts. This Intrada Special Collection release is available while quantities and interest remain!