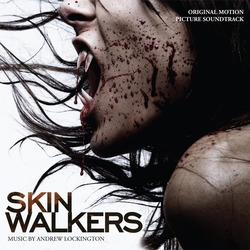 There is a boy out there, like any other ordinary boy on the threshold of puberty, whose fate, unbeknownst to him, is to act as a deliverance for the werewolves of his brood from their curse. His destruction would mean the eternal perpetuation of the blood lust and violent urges of his kind, and thus the good werewolves (who want the curse to end) and the bad werewolves (who see their curse as a gift) will wage battle at the red full moon. Given the whole "biker theme" that impregnates the movie with a strain of violent Americana, I was expecting loud distorted guitars, drum kits, and insufferable techno loops. Andrew Lockington\'s Skinwalkers, though, turns out to be delightfully old school with a discreet modern flare. It may not be the fountain of youth that will rejuvenate the genre, but it is well constructed and enjoyable on its own. The electronics that are used to back the orchestra and the Japanese percussion are never distracting; they have for the most part a strangely organic quality, as if they were the darker side of the orchestra that only comes out at the full moon.

Lockington uses two themes to anchor his score melodically: the first, a short descending motif for low brass, is not unlike Magneto\'s Theme from X-Men: The Last Stand, while the second, introduced in "Cabin Meeting", displays a pervading sense of apprehensiveness into which a reassuring nobility is discreetly woven. This second theme, darkly heroic, returns under various guises. In "Lake", it is voiced by the violins over a throbbing synth effect and is complemented by scratchy vielles playing in an old colonial idiom. The last minute of "Red Moon" gives us the most chivalrous rendition of this melody in its last minute: the trombones voice its opening bars in their lower register over a bed of agitated percussion and a string ostinato, an echoing bamboo flute serving as a coda to this brief heroic passage. "Legend" serves as another highlight, this time capitalizing on the daunting attitude of the first theme. Lockington\'s music builds to a choppy recurring rhythm on the strings similar to the material found in V for Vendetta. As it grows in power, the brass enters, stating Lockington\'s first theme with might over exotic percussion.

This cue, "Legend", also serves to illustrate the composer\'s skillful use of electronic enhancements. While other artists would unleash a fury of digital beats and rabid electronics that would tear through the orchestral structures, Lockington has crafted a subtle underworld of flickers, pulses, whispers, and whines, wholly interesting to the ear, never distracting, and organically blended in with the violins, woodwinds, and exotic percussion. This mélange is tasteful and effective, quite possibly the best way to illustrate the werewolf dichotomy with music.

It is ironic that the metal song that concludes the album, Canadian rock band Braintoy\'s "Destitutorial", is exactly what Lockington\'s score isn\'t: loud, obnoxious, and hackneyed. It\'s the kind of song that always finds its way in the trailers and end credits of gothic PG-13 movies aimed at teenagers who crave the sight of blue-tinted werewolves and vampires battling it out in the modern world. Lockington\'s score avoids that sound and I think we can all be happy for that.