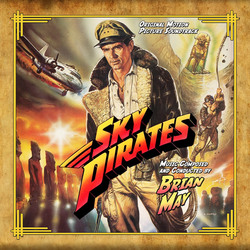 If any element of Sky Pirates can be found not to be wanting, it's Brian May's boisterous and colorful musical score, which gives the movie a thoroughly exuberant dynamic. Sky Pirates is immersed in bold gestures, large orchestral adventure, and heroic measures that are expressed in energetic and exciting terms. Recorded at Allen Easton Studios in Melbourne with a 62-piece orchestra, May's Sky Pirates score is powerful and quite thrilling; based on melody, mystery, and motif, it buttresses the film very well and more often than not subverts the movie's logistical failures with the diversion of thrilling adventure.

Previously released on compact disc by 1M1 Records in the early days of the compact disc format and very hard to find over the years, Dragon's Domain Records is excited to bring Sky Pirates roaring back from the past, newly remastered by Digital Outland. The booklet includes exclusive liner notes written by author Randall Larson.