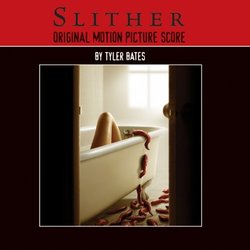 Tyler Bates\' score for the 2006 gross-out fest Slither, for the most part, is a pretty standard run-of-the mill horror score. The score doesn\'t feature any noticeable themes, rather relies on orchestral \'horror\' devices. You know - ambient pre-"boo" scare strings as characters search through dark rooms, orchestral "clanging" action mayhem in the vein of the Alien films, a few strange sounding synth samples to create a not-of-this-world effect - stuff like that.

I myself enjoy action horror music, so a few highlights for me are "I Can\'t Trust you!" "Brenda Bursts," "Bitch is Hardcore," "Blood Vomit," and "Starla\'s Got Her Gunn" - all of which showcase driving orchestral action.  Like the film itself, the score also seems to have a sense of humor. "Just a Bee Sting" has a reoccurring cello motif that is quite quirky. "Love Theme from Slither" opens tenderly, but is rudely interrupted with the gruesome side of the orchestra. When the cue "Russkies" was played during the film, I laughed out loud in the theater (yes, I was the only one) because it is a direct play on Alan Silvestri\'s macho military theme from Predator.

Although action packed and somewhat humorous, the album ends on somewhat of a dramatic note with the somber "Slither Finale" featuring a string and piano motif backed with choir. Yes, it is generic, but Slither is a fun listen. If you consider yourself a person who enjoys horror movie music, then this one will surely hit home.