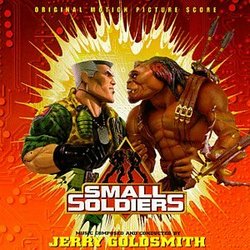 by Dan Goldwasser September 19, 1998
3.5 / 5 Stars
Herrmann and Hitchcock. Williams and Spielberg. These two pairs are among the most famous Composer-Director pairings in the film industry. There are lesser known pairings, but one which has always delighted me, and created excitement in pure anticipation of the result has been Jerry Goldsmith and Joe Dante.

From their first collaboration on TWILIGHT ZONE: THE MOVIE, through GREMLINS, EXPLORERS, "Amazing Stories", INNERSPACE, THE 'BURBS, GREMLINS 2: THE NEW BATCH, and MATINEE, there has always been a chemistry between the music and the images on the screen which just worked so well, you couldn't help but enjoy the experience any more. MATINEE was released in 1993, and five years would pass before we would see the next Joe Dante / Jerry Goldsmith film. That film was SMALL SOLDIERS.

SMALL SOLDIERS came out only a month and a half after Goldsmith's excellent score to Disney's MULAN was released - and there are some stylistic similarities. But Goldsmith returned to "Dante Mode", and provided us with some quirky, exciting, energetic and bold music for SMALL SOLDIERS. The Varese Sarabande CD release contains 31 minutes of music - while not as much as people might like, it's certainly enough to get an overall feel for the score.

Goldsmith established a great musical rhythm which is present in his past few movies - and even more prevalent in this film. The theme seems to be a mutation from THE 'BURBS (at least, it reminded me of it), and when you put it all together - with a little "When Johnny Comes Marching Home" thrown in, you get a score which at times was almost more exciting that the visuals on the screen.

To me, Goldsmith is a unique composer - every movie he scores he writes a theme for. The theme he writes is so good and powerful that you tend to remember it after leaving the theater. In a time where a lot of film scores contain all underscore and action cues, it is refreshing to have a score come along which is thematically based. If you can hum it when you leave the theater, it's a good sign.