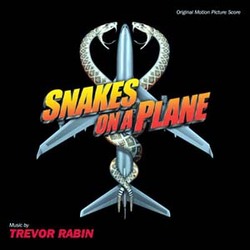 Snakes on a Plane (Score)

Review: Snakes on a Plane (score)

It has been said that Snakes on a Plane is a film best viewed in a crowded theatre with a boisterously vocal audience and booming surround sound. This may explain why I found the film such an unpleasant slog – I watched the DVD at home, alone, where not a cheer was uttered, and not a surround sound speaker was to be seen. What I expected to be a fun rollercoaster ride of a movie turned out to be an empty-headed, overblown mess that shoots itself in the foot by trying too desperately to be Die Hard with snakes…on a plane.

It\'s difficult for me to separate my feelings about the film from my feelings about Trevor Rabin\'s score and I\'m not sure that I\'m supposed to; if there\'s anything that generated a sense of excitement or urgency during the film, it was Rabin\'s music. His score is better than the film but, unfortunately, with a film this stupid, that doesn\'t mean much. Rabin draws on all the clichés of the contemporary action movie score (some of which he invented in films like Con Air, Armageddon and Gone in Sixty Seconds) without doing anything to draw them together into a cohesive whole. Rabin has ditched his penchant for theme and melody in favour of relentlessly driving strings, cheesy percussion (to enhance the movie\'s \'jump scenes\') and noisy brass.

The album opens with a punchy string riff that grows with layers of instrumentation but, within the first minute, Rabin introduces us to the more dominant synth sounds that pepper the score. It\'s the first of a handful of moments that serve as a reminder of what the score, and the film, could have been. From there to at least the seventh track, the album is decidedly unremarkable, the music serving only two purposes: to underscore the film\'s shallow tension or to amp up the scenes of airborne terror. There are occasional flashes of inspiration in the interim, but they are few and far between.

The tone takes a much-needed turn at "Serpent Situation", settling down into a more pensive mood. This continues in "Snakes Kill", the first two minutes of which offer us the closest thing yet to a statement of a theme, first on gentle synth, then on more grandiose strings. But just when things seem to be improving, Rabin takes us back to the indistinguishable, urgent motifs of the earlier pieces. The final track, "Evacuation" leaves us on a decidedly sour note, starting nicely with a orchestral rendition of the "Snakes Kill" theme, but building to a ridiculous, synth-pop finale that comes out of nowhere to evoke memories of some of the worst action films of the 80s. A dissonant ten-second orchestral addendum at the conclusion of the track serves no purpose whatever.

Scores for films that are desperate not to take themselves seriously can enhance the moviegoing experience and work as stand-alone compositions. Take Elmer Bernstein\'s Airplane or Jerry Goldsmith\'s Gremlins for example; scores that never lose their lightness of touch and are enjoyable in isolation. But they were also written for films with competently woven scripts, whose directors had a sureness of touch. Perhaps the score for Snakes on a Plane suffers because the film, despite its pretensions of being a rollicking good time, actually takes itself far too seriously and crosses into blandness. Rabin\'s all-too-earnest approach is in keeping with the tone of the film, but results in a score that thuds when it needs to lift. I suspect it will date almost as quickly as the film.