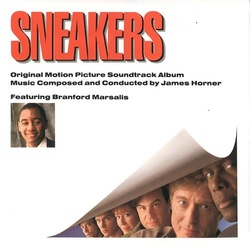 Star Trek II: The Wrath of Khan. Willow. Searching for Bobby Fisher. Cocoon. Aliens. The Rocketeer. Something Wicked This Way Comes. Braveheart. Krull. Brainstorm. Clear and Present Danger. Field of Dreams. Casper. I Love You to Death. Apollo 13. Gorky Park. Honey I Shrunk the Kids. Titanic. Even his early stuff like Wolfen or Battle Beyond the Stars. This is not an idle list. It\'s a great career within only 15 years. So why is it if you get me talking about James Horner, depending on the album, it\'ll sound like I\'m talking about two totally different people?

One is a brilliant and innovative composer. Then there\'s the other guy, a composing machine that seems to copy and paste old ideas in new configurations. Often it begs the question, was the score written prior to 1996? I don\'t know what it is with the mid-90\'s that changed the nature of film scoring, but many composers around that time changed their styles enough that my love for their new work changed to a degree (including John Williams, Danny Elfman and Jerry Goldsmith). Maybe it was an industry thing, maybe it is changing sensibility or me growing up. Objectively I don\'t see it that way.

I can gush a plenty about this score as it arrived just a few years before the turn. Sneakers in one of James Horner\'s pivotal scores of the 90\'s (next to Braveheart and Titanic). Horner reunited with director Phil Alden Robinson after Field of Dreams on this light and clever cyberthriller heist movie starring Robert Redford. The soundtrack would become a highly regarded Horner album and commonplace in film temp tracks. Even Robinson admits he\'s used Sneakers as temp for his other works.

The first track ("Main Title") is in what I can only call the "Sneakers" style.
Delicate female soloists, alto sax with a fast-paced piano and tapping percussion counterpoint that gradually speeds up in dangerous undertones. It\'s an interesting combination because the music is both soothing and exciting at the same time. This has become a Horner trademarked style repeated (with varying instrumentations) in several of his better recent title themes (Bicentennial Man and A Beautiful Mind). The next track ("The Sneakers Theme") introduces what may be one of Horner\'s most playful jaunty themes. It is a light and jazzy with Branford Marsalis performs the alto sax solos (here and throughout the score).

The thriller elements (mainly "The Hand-Off" and "Playtronics Break") are the most common sections of the score. They are not too surprising or different for Horner (sounding familiar to his 48 Hours work) but they are great examples of that particular sound. The villain of the piece is represented in ("Cosmo.., Old Friend", "Goodbye"). Shrill descending strings, low register piano chords and the now "corrupted" sax communicate a once-youthful optimism that has now gone to seed.

What makes this one of Horner\'s great scores is that he plays the light-hearted elements in direct opposition to the thriller elements. Even in the darkest tracks, he uses reprises of the Sneakers theme at appropriate moments to alleviate and contrast the tension expertly. One of my favorite track ("Too Many Secrets") starts with a single piano, which is followed by a second piano, almost mirroring the first one, then a third piano comes in. Then slowly the harp and the female vocalists flowing effortlessly into a reprise of the Sneakers theme before the suspense elements come in. We start hearing the ominous throbbing horns, the rising woodwinds contrasted, the suspense piano stings, stuff we\'ve heard in his other scores. But here it is fresh again. The other high moment has to be "Escape/Whistler\'s Rescue." Up to this point, the score has been restrained to some degree. But as the movie/music climaxes, it evolves for one track into a full-blown fantasy score worthy of Willow or The Rocketeer. Horner pulls out everything, the light magical xylophone, the light soaring strings, even the Horner gong. And suddenly it\'s gone and the score calms back down. The judicial use of such theatrics is magical in its brevity.

This is one of the great anytime listening score and has the awesome power of putting anyone in a good mood. Because I am obsessive-compulsive, I wash my hands fifty times a day, only wear the color orange and I like my favorite soundtracks as complete as possible. There\'s a few great tracks missing and this is a great album, but also one begging for a reissue with additional tracks. Let\'s hope one day someone sneaks it out.