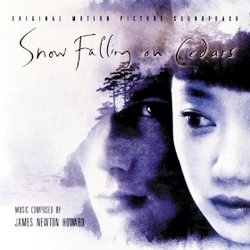 The problem with writing a review after everyone else has already reviewed something is that there's a high risk of saying the same thing as everybody else. In the case of Snow Falling on Cedars, that review would read something like the following: "Brilliantly understated effort. James Newton Howard creates a tangible mood that carries over the entire (lengthy) album, and is consistently melancholy and altogether beautiful. This score's use of ethnic instruments is one of it's many strong suits, and their interplay with the orchestra, solo cello, and string-dominated orchestra might very well comprise some of Howard's best work to date."

As a matter of fact, it is. The score works on a very subtle level, where thematic development becomes like the suspension of time. The album is a very "through" listening experience; to listen to one track outside of the full score would be to lose a lot of the cumulative effect of it. (An interesting note: the album clocks in at just under seventy minutes, which is VERY unusual for a score recorded with L.A. Union musicians—kudos to Decca for having the balls to foot the bill!)

All in all, James Newton Howard is at the top of his game these days. With his success with The Sixth Sense and Snow Falling On Cedars ending this year, and his amazing work on Dinosaur still to come, it seems that he's firmly secured a place among the most sought-after film composers around. And with good reason—Snow Falling On Cedars is, to risk redundancy, some of Howard best work to date.