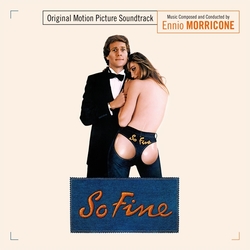 Music Box Records is pleased to present the world premiere release of acclaimed composer Ennio Morricone's original score to the 1981 comedy So Fine.

With classic Italian romps as So Fine's inspiration, Lobell brought in Morricone to score his thus far only Hollywood comedy. The result is a complete delight where the composer's enthusiasm for a singing sexpot and the see-through subject matter inspires a score in the rhythmic key of Rossini, an energetic operatic style that drives So Fine's merry chases. The always lurking Mr. Eddie brings out a skulking brass theme, the 80's NYC setting disco energy, and Bobby's pride in Fine Fashions sly nobility and a salute to the famed "Union Label" march. But as wonderfully funny as Morricone's music is, the composer also endows Lira with one of his most beautifully lush romantic themes.

The soundtrack debut of So Fine is presented in stereo from pristine condition from multi-track session tapes, featuring exclusive liner notes by writer Daniel Schweiger and new comments by director Andrew Bergman and producer Mike Lobell on their collaboration with composer Ennio Morricone.