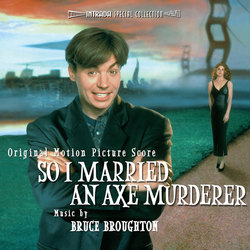 So I Married an Axe Murderer - Original Score

So I Married an Axe Murderer is riddled with jokes, visual gags and plenty of fun. And it required almost wall-to-wall music, via numerous songs and source music, literally from start to finish. Composer Bruce Broughton had the task of filling in the gaps, tying up loose ends, bridging the jokes and keeping a brisk pace. He also had the additional challenge of making the action-packed finale as exciting as possible.

He wrote a score that was initially tuneful and flavored with humor, then ushered in suspense and climaxed with over-the-top action. He skillfully kept everything cohesive by fashioning a winding, flexible melodic idea with hints of mischief and danger that could be used in guises from hip to suspenseful, from gentle to exciting. It was just the unifying musical approach the picture needed.

For this premiere presentation of Bruce Broughton's score, Intrada had access to the complete digital two-track stereo session DATs made by Armin Steiner, Broughton's frequent scoring mixer, allowing for not only a presentation of his score as heard in the film but also the alternate versions of cues as well as the unused sequences that were replaced by material from other artists. The results are an album full of easy-to-digest tunes, smoky suspense cues, original source numbers and, ultimately, some genuine orchestral fireworks.