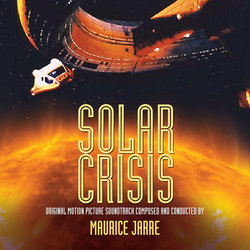 For the 1990 film Solar Crisis, the filmmakers chose a composer by then known for his unique blend of synthesizers and acoustic instruments. With varied sci-fi projects already completed, Maurice Jarre seemed a logical choice for another big-budget sci-fi fantasy. But the score as heard in the film often bears little resemblance to the score as it was originally recorded. Because post of production tinkering, scenes were either rearranged or cut, disrupting Jarre's original musical intent.

In addition, entire sequences, including the film's opening, were re-scored by Michael Boddicker. All of this makes finding Jarre's vision (which is presented on this disc in its original order) within the film an exercise in futility. But certain moments stand out—some for their inclusion and some for their exclusion. One of the biggest omissions occurs right at the beginning—Jarre's original "Prologue." Jarre's contribution sets up numerous musical elements that will be used throughout the score—an ominous low brass theme, trademark oscillating French horn chords, and a C-minor theme for clarinet and bassoon that comes to full orchestral fruition in the finale's majestic choral passage.

Even in its truncated form within the film, Jarre's distinctive musical voice still manages to shine through. But heard on CD in its complete, original form, Jarre's score can be discovered for what it is—a prime example of his period blend of acoustic and electronic instruments, and a unique musical vision that shines in its originality. This premiere release of the score is presented from the two-track stereo session mixes of the print takes made by Shawn Murphy and preserved on two DATs.