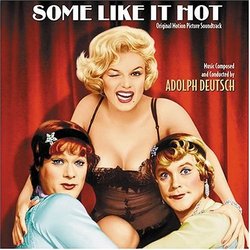 A few years ago, the American Film Institute named Some Like It Hot the best film comedy of the past one hundred years. Watching the movie now, forty-five years after its initial release, it's easy to see why it deserved the designation. Billy Wilder's screwball comedy about two Chicago musicians who dress in drag to escape the mob after witnessing the St. Valentine's Day Massacre offers something for everyone. It serves up slapstick, witty one-liners, mistaken identity, and true love in a delicious mixture that is still potent today.

Adolph Deutsch was nearing the end of his career when he took the Some Like It Hot assignment (he retired from scoring two years after this film). Today, he is best known for films such as The Maltese Falcon, arrangements and orchestrations of Broadway musicals for film such as Annie Get Your Gun and Oklahoma, and the several Billy Wilder films before Some Like It Hot that he had scored. This film, coming at the end of an enormously successful career, seems tailor-made for the composer and serves as a perfect capstone as its score consists primarily of songs and arrangements of jazz standards.

Since the main characters are jazz musicians and they join an all-girl jazz orchestra to hide, Adolph Deutsch's score overflows with infectious jazz rhythms. Of course, even with two stars like Jack Lemmon and Tony Curtis headlining the movie, the spotlight belongs to Marilyn Monroe both in the film and on this score release. The album opens with her singing "Running Wild," and she is also heard on the indelible "I Wanna Be Loved By You." Monroe did not have a great singing voice, and there is much lost in only being able to hear her and not see her, but she knew how to sell a song and even audibly this talent shines through. The album's other songs, such as "Down Among the Sheltering Pines," are sung by a female chorus, the other female jazz musicians presumably. These songs serve to set the movie firmly on the Florida coast, but none are particularly memorable.

The instrumental cues are delightful vestiges from Hollywood's golden age of scoring. They serve as pleasant background music, fit the picture's mood and style, punctuate the on-screen comedy, and know when to get out of the way and be unobtrusive. The standout, at least on this recording, is Deutsch's arrangement of "Sweet Georgia Brown." Full of high energy, the cue sounds as though it came straight from Louis Armstrong's hot jazz period of the 1920s, with the head being passed around among the lead instruments (including a wonderful piano solo), backed by a solid percussion section that even uses the cowbell to great advantage. It's enough to make you want to get up and dance.

Is Some Like It Hot a pinnacle of film scoring? Not really, but it is a solid effort that has been nicely restored with a minimum of sound degradation to block enjoyment of the sound. This release, like the Rykodisc before it, is not a must-have unless you are a fan of the film, appreciate comedic scores from the 1950s and 1960s, or just like, as Marilyn Monroe comments at the closing of the cue "Some Like It Hot,""jazz, real hot!"