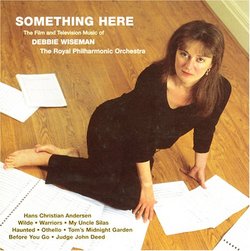 Something Here: The Film and Television Music of Debbie Wiseman

Review: Something Here: The Film and Television Music of Debbie Wiseman

A galloping string ostinato brilliantly punctuated by shaking bells and a two-note trombone motif may not be the way one would expect a compilation of Britain\'s own Debbie Wiseman\'s work to begin. Indeed, the pleasant English countryside is put on the back burner as the album opens with a majestic and rhythmic ode to the vast Western landscape of America. It serves to show once more that Debbie Wiseman has a versatility that should make other composers envious and is in full control of the orchestra. This versatility is less evident in the subsequent cues which, for the most part, delve into Romantic, emotional writing; however, what this first cue, "Wilde West", prepares us for is a stellar performance by the Royal Philharmonic Orchestra. Every section excels, but the brass is in especially top-notch form and the recording honors its resonance and sheer power. "Wilde", the second cue drawn from Wiseman\'s score to the famous writer\'s cinematic biography, calls upon the brass section to deliver a gargantuan theme that is as big as the writer\'s personality, a sad melody that is intercut by quieter sections of unease. Throughout the album, this complicity between the composer\'s writing and the orchestra\'s delivery is remarkable and makes for a truly great listen.

A majority of the material Wiseman presents here is clearly joyous and romantic in feeling, with a bit of English pluck at every corner, such as the suite from "Before You Go", in which Wiseman\'s approach is similar to John Williams\' in Always. The piano is brought in to add some pluck and a distinct Classical influence, while the strings, brass, and woodwinds join in gorgeous statements of the frivolous descending theme. "My Uncle Silas" is drawn from the same vein, being at once pompous and charming; its sometimes cute waltz might not be for everybody and, indeed, some of the music on Something Here can be dainty or overly melodramatic. Fans of tormented and foreboding music be warned. While "My Uncle Silas" will be perceived by some as too cute to be appreciated, a suite such as "Hans Christian Andersen" remains in the same major mode mold while promoting a strong fanfare for the title character that will ensure everyone in the room is listening. Once again, Wiseman\'s ear for melody is superbly complemented by the Royal Philharmonic Orchestra\'s crystalline brass section.

Wiseman was allowed a bit of room in her early career to expand on this style and experiment outside of the melodramatic range. Her powerful and commanding march for Judge John Deed is one such example; another is the solo violin and ethnic percussion led "Warriors" about British soldiers in war-torn Bosnia. The composer chose to use the Yugoslav scale in her score while having the music performed by a traditional Western orchestra: this lends the music a touch of Eastern European mystique while, at the same time, keeps it grounded and familiar for North American and Western European audiences. Her most classically inspired piece is perhaps the suite from "Othello" which delves into Renaissance and Early Baroque idioms. I personally prefer Jeff Danna\'s take on a modern-day Othello (i.e. his score from "O"), where he made prominent use of early instruments and a twisted theme for Iago, but Wiseman\'s is interesting on its own, a sort of predecessor in tone to her superior Middletown.

Indeed, one finds Wiseman\'s early work to be magnificent and powerful, but also inclined to excesses of melodrama. While this characteristic makes for a more listenable album as opposed to more restrained music, it has been put to better use in Arsène Lupin and thankfully diluted in her recent score to Middletown. These moments of overbearance aside, Something Here is a truly entertaining collection of cues from Wiseman\'s early career which demonstrates an attention to her craft and a mastery of the orchestra. The Royal Philharmonic Orchestra is the perfect vehicle for Wiseman\'s writings: their performances are crisp, powerful, and sublime. They help showcase a genuine talent whose future projects will hopefully grant her the exposure she deserves.