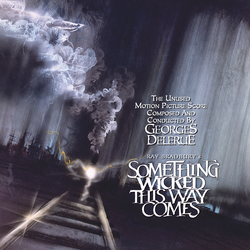 For Something Wicked This Way Comes, composer Georges Delerue was overtly excited by the opportunity to write one of his first large-scale, Hollywood fantasy scores for a huge orchestra—a score that could handle Gothic and avant-garde elements along with his trademark lyricism. In the course of two weeks, he wrote over 50 minutes of music—brash, exotic and at times demented, but grounded by a sweet melody for childhood innocence. Director Jack Clayton was delighted.

Delerue's score deftly complements the suggestive shadows and quiet evil—as well as the sadness and sweetness of the father/son relationship at its heart. The film's moralistic themes, mysterious carnival attractions and intimate humanity inspired him to fill his score with gut-rattling calliope material, Gallic lyricism, a sparkling music-box tune, a heightened funeral march, solemn drama and classic Hollywood suspense. By most accounts, however, Clayton's understated, slightly claustrophobic film simply wasn't scary, or big, or fantastical enough, resulting in the film's editing, special effects, and music given a serious overhaul. For Delerue, scoring the picture was quite a journey, one that ultimately led to the most disappointing moment in his career—the score went completely unused.

This presentation is sourced from the recently discovered complete 2˝ 24-track scoring session masters, stored in the Disney vaults—unlabeled. This amazing find allowed Intrada to newly mix into digital stereo, including every sequence Delerue wrote for the film. This included several cues recorded prior to major postproduction changes that were, themselves, dropped from the then-existing cut of the film.