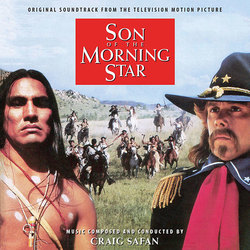 Son of the Morning Star - Expanded

Intrada revisits an early 1990s release with an expanded, 2-CD set featuring composer Craig Safan's magnum opus, Son of the Morning Star. Initially released in 1991 at the time of the miniseries' airing and out of print for many years, collectors have often requested Intrada revisit, expand and reissue Safan's emotional, musical journey of George Armstrong Custer and his last stand. Four ideas anchor Safan's orchestral score. His haunting theme for Custer conveys much—usually voiced on solo trumpet, it references Custer's military career and embodies a sense of Americana, while also capturing the general's solitary, independent nature. Preceding Custer's theme at the outset of the film is a series of three chords orchestrated for strings designed to evoke a sense of tragedy, as the inevitable conclusion looms just hours away in the film's narrative. A second theme, usually orchestrated in lush, impassioned strings, is what Safan refers to as "the big emotional melody," inspired in its creation by Samuel Barber's Adagio for Strings. Finally is "Libby's Theme," reflective of her relationship with Custer and the steadying influence she exerts on Custer's life. All together it creates a powerful journey to the tragic, forgone conclusion.

For this new release, Intrada presents the music in picture sequence, including Safan's Native American cues and the Irish-flavored cues that encompass the brief but important "Garryowen." The source elements for this release were 2-track stereo session DATs made by veteran scoring mixer Dennis Sands, who helmed the 1991 orchestral recording sessions in Salt Lake City, Utah.

The title, Son of the Morning Star, was taken from a nickname given to Custer by Native Americans for his penchant to attack at daybreak. The controversial military leader, who graduated last in his class at West Point, became the youngest major general in the history of the U.S. Army during the Civil War, although he returned to his regular rank after the war and was a colonel when he died. Both book and film focus on the last decade of his life and its tragic end.