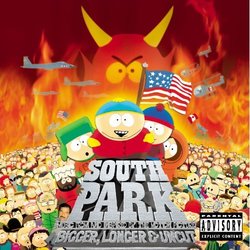 I have been a fan of "South Park" ever since the original "Sprit of Christmas" short started making its rounds through the Hollywood system. When Trey Parker and Matt Stone got a series launched on Comedy Central, I was eagerly anticipating the same outrageous, raunchy, lewd- yet fresh -comedy that the short film had contained. While I was pleased with some episodes, others fell flat. A good deal of the humor in the original short lay with the fact that we were watching eight year olds use the most foul language you could imagine. Of course, on television they can't do that.

So when the feature film South Park: Bigger, Longer and Uncut was announced, I hoped that it would harken a return (of sorts) to the style first brought to my attention in the original animated short. Well, I was not disappointed. I would easily have to rank this film as one of the funnier films of 1999 (along with Election, Dick, and Drop Dead Gorgeous). If you can get past the crudeness of the language, or the occasionally foul (or offensive) subject matters, then you'll realize that this is a movie with a good story, some good lessons, and some really good music.

Marc Shaiman, who professes to have helped spread the original South Park short film around Hollywood, was tapped to provide not only a large orchestral score for the film, but also co-wrote many of the songs (yes, this movie is a musical). Marc and Trey knew that about 80% of this film was going to be satire or parody - and it came through even in the music. The opening title musical number ( "Quiet Mountain Town") is a direct knock-off on Beauty and the Beast, while "Tomorrow Night" takes its structure from "Les Miserables", and "I Can Change" comes at us from The Little Mermaid (to name a few).

The lyrics are, to put it mildly, quite foul in some of the songs. There is a Parental Warning sticker on the CD, and parents should take that to heart. There is even a track, "Uncle F***er" which pushes the boundaries of good taste in many ways. But not all songs are Rated-R. "Up There", "Quiet Mountain Town", "I'm Super" and others are listenable without being totally objectionable.

One of the downsides to the album is the exclusion of any of Shaiman's score (it was one of the best he's done in the past few years), and the inclusion of "modern versions" of some of the songs. These pop derivations don't lend much to the album, except to fill more space and sell more CDs- which of course is the point.

So if you have seen South Park: Bigger, Longer and Uncut, you know what songs are on this album, and should use your own judgment in buying it. If you haven't seen the film, I recommend you do so- only because it was highly entertaining and better than many of the other films out this summer. Now we just need to hope that a score album comes out in the near future.