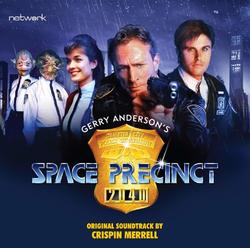 Gerry Anderson, the hugely influential creator of UFO and Space: 1999, made a spectacular return to television in the early 1990s with Space Precinct an incredibly exciting series that mixed live action drama with state-of-the-art prosthetics and animatronics to give a police procedural with a definite twist! Now for the first time composer Crispin Merrell's memorably thrilling soundtrack is available to enjoy on this highly collectable four-disc set. Alongside episodic suites of music and a 64-page set of track notes, this definitive soundtrack release also features alternate and unused takes of the series' outstanding title music. This much-sought-after Gerry Anderson soundtrack is available to retail for the first time! Includes extensive 64-page liner notes booklet covering both the soundtrack and the series.