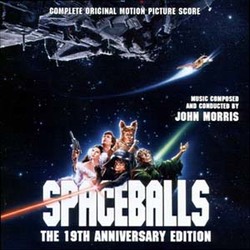 You don\'t have to be Druish to enjoy Spaceballs, an expectedly zany yet somewhat uneven 1987 science fiction parody, written and directed by Mel Brooks. Primarily a send-up of the original Star Wars trilogy (since of course there was no prequel trilogy at this time), it has become just as popular and quotable within general pop culture as previous Brooks favorites, Young Frankenstein, Blazing Saddles and The Producers. It was also pretty much the last film of his to be classified as a modest success, as post-Spaceballs efforts such as Robin Hood: Men In Tights sadly featured more misses than hits in the laugh department. But of course it is common knowledge that Mel Brooks has hit a new peak with the Broadway musical interpretation of his 1968 film, The Producers - could an all singing and dancing version of Spaceballs be far behind? I\'d certainly like to see them attempt to transform Mega-Maid live on stage while flying a Winnebago through its inner workings.

Through the many film travels of Mel Brooks, it is fortunate he found such a wonderful talent as John Morris to accompany him. Due to Brooks\' ability to smartly parody many genres, it has provided Morris with a wide musical canvas, allowing him room for expression in the established formats of Western, thriller, musical, adventure and with Spaceballs, large scale science fiction. This last effort is the first to have its full score represented on disc and it is a great opportunity to enjoy the varied thematic material Morris developed for the film. Since this is a riff on Star Wars, the obvious springboard for his "Main Title" would be John Williams and yet the bright fanfare, warm bridge and constant, racing snares seem more patterned after a military march, such as The Great Escape. Following this is the menacing, almost Jaws-like theme heralding the arrival of Dark Helmet\'s needlessly long spaceship. The main theme is then put through the paces in an exciting action track "Bad Year Blimp/Sharking the Ship".

New melodic material, recalling Maurice Jarre\'s Lawrence of Arabia, arrives in both "First Desert/Desert Playout" and "Desert, Thirsty, March, Falls", while a sweet, charming love theme, in the mold of Max Steiner and Alfred Newman, is displayed next. Also adding to wealth of themes is "The Schwartz", with its short ascending-descending structure set against rising, flowing strings. Pulsating action picks up again in "Lonestar Corridor/After Stunt Doubles" while overblown, building crescendos and pounding timpani accompany the appearance of "Mega-Maid". The lengthiest track underscores the climactic scenes inside Mega-Maid, from the suspenseful "Entering the Ear" cue to the brassy, staccato scored fight between Lonestar and Dark Helmet. Afterwards, the film continues for a surprisingly extended fourth act, during which Morris is ably revisits the love theme in "Keep It For Yourself" and "Kiss/Big Finish", the solo church organ in "2nd Wedding" and the heroic main theme in "Yogurt\'s Goodbye/Liquid Schwartz".

With this new expanded release celebrating the "19th anniversary" of the film, it includes many special treats such as the "Main Title" without whooshing sound effects plus an alternate of the same, multiple versions of both the Mega-Maid transformation sequence and the love theme (some with a gentle, jazzy backbeat), original 1987 album versions of several score tracks and the now dated pop/dance number "Spaceballs" by The Spinners, which underscored the evacuation of Mega-Maid in the film. Informative liner notes including new quotes from Brooks and Morris round out the packaging, although the track titles feel like the music editor\'s spotting notes.

As with the classic comedy scores of Ira Newborn and Elmer Bernstein, John Morris was able to slyly punctuate the hilarity offered by Mel Brooks\' films and yet also provided them with some sincerity through his original melodies for each. Whether featured through song arrangements in the context of the film ("Springtime for Hitler", "High Anxiety") or developed throughout the score proper (the Transylvania lullaby in Young Frankenstein), Morris\'s contributions helped make the characters and their oddball stories endearing to an audience in an honest fashion, so they would not simply be comedic ciphers or joke machines. We can laugh at or with Lone Star and Barf, Leo Bloom and Max Bialystock or Dr. Frederick Von Frankenstein, but we can also feel for them through their defeats and victories, thanks to the marvelous music of John Morris.