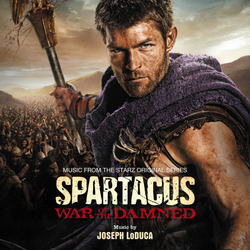 Spartacus: War Of The Damned

Gaius Claudius Glaber is dead. The rebellion has swelled to thousands of freed slaves, and Spartacus is determined to bring down the Roman Republic. Following Ashur's death, Naevia and Crixus fight as one. Together with Gannicus and Agron, they prepare for war with Rome. The Roman Senate turns to Marcus Crassus, a wealthy, strategic politician, for aid. With a young Julius Caesar as an ally, Crassus must crush the rebellion.

The epic conclusion of a legendary journey, Spartacus: War of the Damned unleashes a battle unlike anything ever seen before.

Composer Joseph LoDuca, who provided the heroic scores for the television action series Hercules and Xena: Warrior Princess, returns to bring the Spartacus saga to its thrilling climactic finale.

Spartacus: War Of The Damned began airing on Starz January 25, 2013.