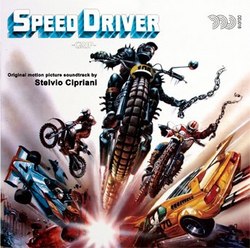 A score composed for an action movie in which steaming engines, consumed wheels and boiling asphalt are in the background for one of the most rhythmical scores by Stelvio Cipriani ever composed to describe action and thrilling!

Previously, all the music available was released on a 45rpm. Now, with all the original stereo master tapes, our edition lasts nearly one hour of highly energetic music to be consumed preferably before physical activities!