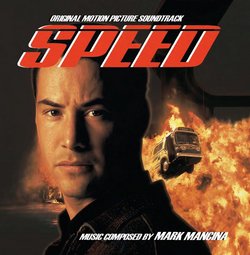 This action blockbuster NOT ONLY launched the careers of stars Keanu Reeves and Sandra Bollock, as well as director Jan De Bont, but it also catapulted composer Mark Mancina into the A-list category of film composers.

Composer Mancina crafts a brilliant, pulse pounding action score that became the template for all action films since 1994. Previously released on Fox Records, this newly remastered and expanded version features 70 minutes of balls to the wall, speaker bursting, adrenaline-inducing film music that should be outlawed in all moving vehicles.

Producers Nick Redman and Mike Matessino ramp up the excitement and put this bad boy into overdrive by putting the score back in film order. John Takis takes the listener behind the scenes of the film and the score while art director Mark Banning makes it all look good.

We always try to add a little something extra for the fans of the film, and in this case we went ahead and licensed the end credit song "Speed" by Billy Idol and included it at the end of this release. It had to be there.