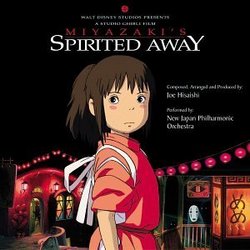 Film history has only provided us with a handful of filmmakers whose work can be described as a genre in and of itself.  Hayao Miyazaki's animated films can be described as such, mainly because they unabashedly convey a rich, unique, often disturbing fantasy world.  His most recent addition to this genre is Spirited Away, the runaway hit in Japan last year, and some would argue that it is his best so far.  Appropriate to the genre, Joe Hisaishi provides a broad, evocative, often eerie score to complement the work.

Spirited Away tells the story of a little girl traveling with her parents to a new home.  Along the way, they stop at a mysterious abandoned amusement park, and the girl soon finds herself battling a mysterious spa matron to win back her parents, who ironically have been turned in to swine after eating food not belonging to them.  It is easy to describe Miyazaki's work as "very Japanese," given the unique cultural cues alien to Westerners, but this description is both limiting and unfair.  Miyazaki effectively creates a whimsical, scary, rich world all his own, handily conveying the fears and hopes that a little girl would have when separated from her parents.  The story itself is simple albeit a little unsatisfying; it is the world and its cast of characters that matter.  Those who like this film are the ones ready to embrace the world conveyed by the filmmaker.  There are others who find it too strange or even dark.  However, no one cannot deny the depth and imagination of the film.

Hisaishi's score is a rich blend of broad orchestral work and smaller, more melancholy pieces, primarily piano works.  It maintains consistent motifs, but remains diverse enough to handle the variety of situations the main character goes through.  One can hear hints of traditional Japanese composition amidst the pieces, but the score certainly remains accessible to all.  The score is quite effective in guiding the emotions of the audience from joy to fear to sadness to excitement.  Though diverse and unique, there is a very intimidating, strange element to the spa the little girl finds, and the score does not hold back in conveying that darkness.

Having said that, many listeners might find the score too dark and lugubrious.  There are moments in the film which seem unnecessarily haunting and dark.  For the most part, though, this is appropriate, given that the main character is suffering from the fear of losing her parents.  The only other viable criticism is of the obligatory pop tune, "Always with Me," at the end of the disc.  After such a delightful score, one has this "just when you thought it was safe" feeling come upon them when the ultra-hackneyed work rises at the end.

In conclusion, this is a strong, appropriate score for a challenging film.  The score would be good for any fan of Miyazaki's work or fans of big, often sentimental, film music.  It is probably not right for those who like more restrained, subtle movie music.