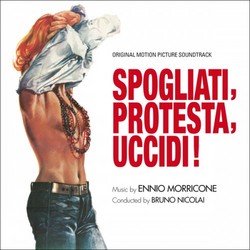 Quartet Records and Gruppo Sugar are pleased to present the expanded program of a seventies Ennio Morricone cult-score.

The music in Spogliati, Protesta, Uccidi is anchored by the theme song "No One Can" with Swan Robinson performing the lyrics of Audrey Stainton Nohra. Apart from Swan's version, there are different takes using the I Cantori Moderni di Alessandroni, the same choir with an organ or the flute. The variations of the love theme are nicely complemented by more experimental material such as the primitive jungle beats of "Iniziacione '72" and "Incubo Femmineo" or the sparse percussion suspense piece "Danza Nelle Tenebre."

The score was initially released on LP in 1986 by Cerberus Records in the U.S. and was later issued on CD in Italy by CAM. The current CD features two brand new tracks and restores a previously released cues to its full length with a total of 13 minutes of previously unreleased material. Mastered by Dániel Winkler and Claudio Fuiano from the first generation master tapes courtesy of Gruppo Sugar. The 8-page booklet features liner notes by Gergely Hubai discussing the film and the score.