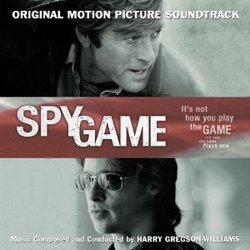 Performed by
The London Session Orchestra and Metro Voices

In Spy Game, CIA officer Nathan Muir (Robert Redford) is about to retire - when he finds out that his former protťgť Tom Bishop (Brad Pitt) has gone rogue, been captured, and is scheduled to die within 24 hours.† Muir must figure out how to rescue Bishop while at the same time recounting to his superiors how he met and trained Bishop.† Told primarily in flashback form, the film is a stylish piece of entertainment that is exactly what I expected from director Tony Scott.† The acting is solid and the plot ultimately simple - the editing actually makes it seem more complicated than it actually is, and that works in the films favor.† The exotic locations and sharp cinematography push the film forward, but it's Harry Gregson-Williams's techno-laden score that drives it down the road.

Taking place in 1991 at the end of the Cold War, the opening title sequence ("Su-Chou Prison") focuses on a covert operation where Bishop tries to break Elizabeth Hadley (Catherine McCormack) out of jail - but things go wrong, and he's ultimately caught.† The music is filled with percussion and Asian-sounding strings, and the tension builds throughout the cue until a rather exciting climactic orchestral crescendo.† (At that point, the main titles slam onto the screen.)† "Muir Races To Work" is a typical progression cue heard in this score - a low techno groove and rhythm, with orchestral strings slowly filling in the gaps.† It's a bit heavier on the drama, and not so action oriented.† "Red Shirt" involves (in a flashback) Bishop's first assassination assignment in Vietnam.† Bits of The Rock peek through here, which don't detract from the score - rather it reminds us where Gregson-Williams is coming from.

"Training Montage" comes back to that low techno grooves, and underscores a rather amusing sequence detailing Bishop's training by Muir.† One of the more electronic of the cues, it works well in the film - which is surprising since it takes place in the late 1970s at that point.† While the score continues to return to the Asian motif ("...He's been arrested for espionage."), other ethnic angles are presented as well.† In "Berlin", a rather somber dramatic cue with slightly Russian overtones is heard as a plan to bring a defector across the border goes wrong - but for a reason.† Soft string chords and chorus underline the emotional points in "It's Not A Game", where Bishop discovers how Muir really works and thinks - and it's not something he's too thrilled with.†

The bulk of the flashback sequences take place in Beirut - so expectedly, a number of cues contain Middle Eastern elements.† "Beirut, A War Zone" is a softer cue containing vocal elements, as well as a few indigenous instruments; "All Hell Breaks Loose" uses percussion and voices to builds up slowly, adding to the tension as the mission starts going wrong.† It comes to a climax with a tragic restatement of one of the main themes in "Explosion and Aftermath", which also contains softer dramatic elements.† There is a love story here as well, and it involves Bishop and Hadley.† Their relationship is underscored by a boy soloist, as heard in "My Name is Tom" and the climax of the film, "Operation Dinner Out".† Most of the cues with Muir trying to piece together what happened to Bishop - and how to rescue him - fill up the second half of the album.† It's fairly consistent with the rest of the album: soft dramatic strings, a slight percussive beat, and the occasional techno-groove spot.† The film really builds steam with the climax, which begins to be heard in "Back at Su-Chow Prison", a soft cue that builds to the same crescendo heard when Bishop was captured at the beginning of the film.† (Props to Gregson-Williams for using that motif a few times - it works incredibly well in the film with the editing, and puts the audience on edge.)† "Operation Dinner Out" covers the end of the film and the end credits - it's dramatic, emotional (remember, it has that boy soloist), and then it bursts into that techno groove to wrap it all up.† The album is capped off with two "remixes" of themes and music from the score, which was a rather neat addition to a relatively enjoyable album.

Some might argue that this score suffers from a bit of a Media Ventures influence.† Certainly, some parts reminded me a bit of The Peacemaker, Enemy of the State, and even Armageddon.† But ultimately, the score had to work for the film, and in that respect, it did a fine job providing the right level of excitement, drama, and tension.† It was nice to hear a solid solo effort from Gregson-Williams, who seems to have had more success with his collaborative works (Armageddon, Shrek, Chicken Run).† As a CD listening experience, it was a little harder to get through this album than tin the film - some of the cues felt as if they meshed together, and 71-minutes might have been a bit longer than this score really needed.† You might want to wait until you see the film before picking this one up, just to be safe.